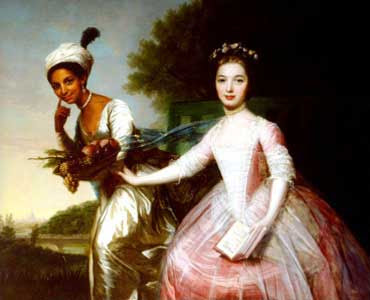 The Fake or Fortune programme also investigated this most wonderful double portrait from Scone castle showing the Earl of Mansfield's great-nieces Dido and Elizabeth, in the grounds of Kenwood House, where they lived, giving each almost equal pictorial importance despite the social gulf between the daughter of an enslaved mother and an aristocratic one.
This alone would make it astonishing, but the whole lively presentation of the two sitters is notable.
As James Mulraine wrote way back in 2014
"It is a remarkable painting. The staging implies that the two girls have been surprised by the arrival of a visitor, the viewer. Lady Elizabeth Murray composes herself according to etiquette, reading, or pretending to read, but from her smile and Dido’s barely-suppressed grin it’s clear they’ve been laughing just that moment before. More importantly, Dido has leapt to her feet, but Lady Elizabeth’s touch on her arm restrains her, as if she is saying she can sit down again. Dido is dressed in a turban like a black attendant in a painting, but they seem more like sisters."

That idea/illusion surely marked a breach in etiquette that must have been endorsed by the Murrays, and presumably also by Mansfield, who paid for the portrait.
F or F did a good job in locating the £200 payment in Mansfield's accounts, although I am surprised that this had not been done earlier, as it's the obvious source. Furthermore, the payment identified the artist as David Martin (1737-1797), pupil and colleague of Allan Ramsay, the foremost Scottish portraitist.
There seems to be some ongoing debate about this identification, but it is eminently defensible.

Other, independent research by Etienne Daly conjecturally identified Dido's turban with  one presented to her father Sir John Lindsay, who as well as his naval career in the Atlantic and Caribbean, was posted to India in 1769.   He is said to have received from Walla Jaha the ruler of Arcot Amir ul Hind,   a dress of gold brocade, an inscribed ring and a turban, the last of which may be  the jewelled turban that Dido is shown wearing, with an additional black ostrich feather to put it at the forefront of European fashion.

As it happens,  Dido Belle and Elizabeth Murray are not the only eighteenth century portrait sitters to have been thus depicted as a pair.   But these two below are clearly mistress and maid, although the latter also wears a black ostrich feather and has laid her hand familiarly on her companion's shoulder.   Is there any information on this painting? 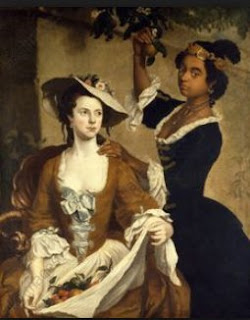 May Morris to be seen in Edinburgh

two bits of May Morris news. 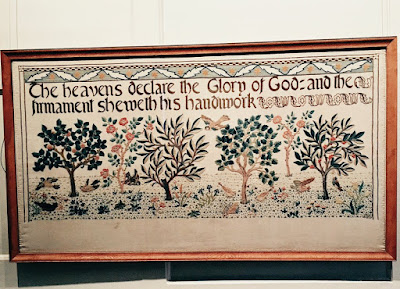 Threads
I’m the life picked out in needlework, embroidered,
a chain-stitch away from parents whose artistry was
remarkable. I am the satin-stitch of dusky grapes, a
woman with fingers that spun silvery vines, wrought
always in a green that winter cannot wither. This I
was, and am, and more. I am a tangle of strawberries,
though this seed did not fall far from its trees. I am
none and all of these. I am fastened, coiled in skeins
of inheritance, soft as heather, the trellis of violets
you could almost smell. I am speckling feathers that
seemed to take flight, birds fledged of frame, calling
to my herringbone soul, a fly-stitch song. I am all that I
think and sew, all that I made and did not make. And
So the silk is cut, and I am where the threads break.

@PoetSarahDoyle:   'The May Morris quotes were painted onto the walls at the William Morris exhibition, and I found those two lines really inspiring! She’s a fascinating and important figure.'.

EXHIBITION
'May Morris Art and Life' will be re-shown, in slightly different iteration, at the Dovecot Studios in Edinburgh, in autumn 2019.  In due course the information will be posted here  https://dovecotstudios.com/ 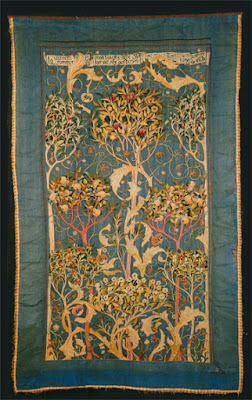 Recently, when doing other things, I've fortuitously visited several churches with memorable memorials, making it seem I'm a bit fixated on death.  But that how life is.
The latest was St Briavels in the Forest of Dean, where are these effigies to William (died 1573) and his wife Mariana (born Catchmay) reclining on their elbows almost as if woken fully clothed from the marital bed. 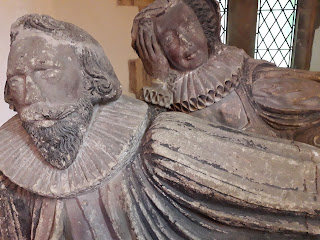 William's left hand holds a bible or prayerbook, probably signifying the protestant faith, and his left hand rests on a now-damaged skull.  Their four children, including one still swaddled who presumably died while a baby, are represented on the tomb side. 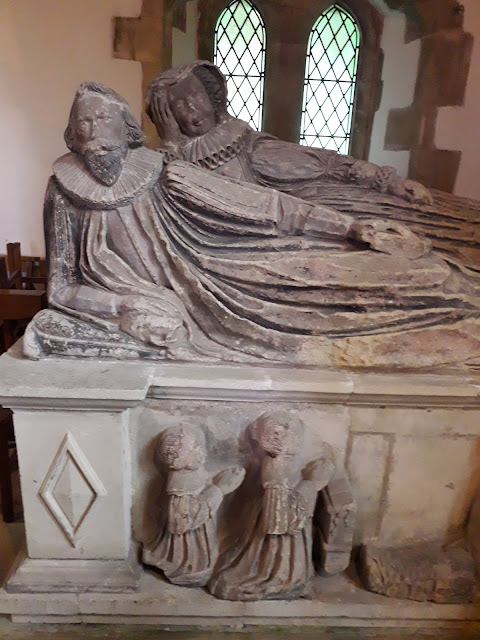 That's about all the information the memorial (and church) offer so I don't know who they were, except that both Warrens and more notably Catchmays were local gentry, and one may assume the memorial was erected by a surviving child.   Most striking are the strong sculptural lines of their robes with deeply incised folds and the expressive facial features,  William appropriately sombre, Marian with a curious half-smile.
Equally striking are the traces of colour on the stone, showing that William's gown and pillow were originally painted black, and Marian's lips and cheeks were rouged.  This, together with the skull and elbow poses, is similar to the female effigies in Hatfield that I saw back in July.
So I'm now on a hunt for more painted  Tudors and Jacobeans. 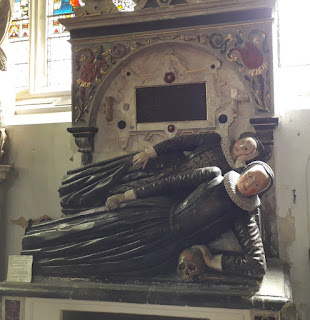 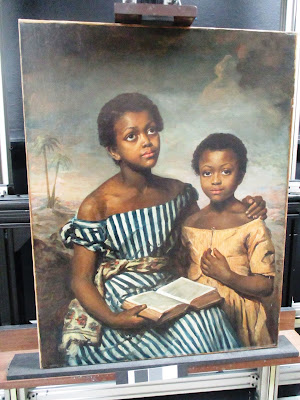 Features on BBC1 Fake or Fortune tonight
It really wasn't difficult to identify the artist as she signed and dated the work on the elder girl's sash, and E Jones is readily found as the future wife of Alexis Soyer.
And it is very obviously an anti-slavery image [ the plastic palm trees are a giveaway, together with the Bible that enslaved people were prevented from reading, according to indignant campaigners]
It's a shame however that the programme did not search Abolitionist literature to see whether the painting was reproduced anywhere as an engraving, it carrying such an eloquent message.  it looks tailor-made for use by the movement.
It's also notable that it was painted in 1831 - the year  that ended with the great Jamaican slave revolt led by Samuel Sharpe,  when expectations of emancipation had been dashed.   This was the political context of an otherwise supremely sentimental picture.
Some Abolitionists in Britain and missionaries in the Caribbean had been predicting that William IV would end enslavement, and the work stoppage when this did not happen was countered by violence that killed hundreds of Black Jamaicans.   Only the election of the Reform parliament brought  anti-slavery legislation in Britain, initially in 1833, finally in 1838.
Another unexplored aspect of Emma Soyer's painting is its unrecorded history. It was not exhibited or sold in her lifetime, but , as 'Two Negro Children with a Book' passed in 1859 after her husband's death to one of his creditors.   Possibly the debts were paid off by Soyer's surviving brothers in France, which is where the canvas was when inherited by the present owner.
Emma Jones Soyer (1813-1842)  was a precociously successful and prolific artist 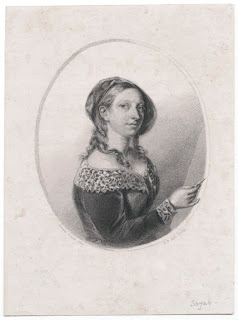 This stipple engraving is copied from a self-portrait showing herself at the easel.  The loose ringlets appear to date the likeness to around 1840.  She died  during pregnancy.