A very brief post on an interesting Victorian whom I just heard about from Advolly Richmond, who has researched his role in botany and plant cultivation 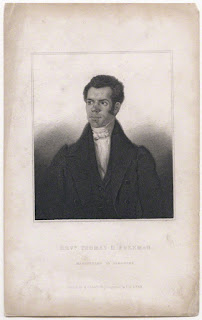 Thomas Birch Freeman, born in Twyford Hants 1809, began his career as a gardener at Orwell Park near Ipswich until dismissed for  turning Wesleyan, but he trained in horticulture at Kew Gardens and was also ordained as a Methodist minister - one of those of African ancestry that the churches believed were less likely to succumb to tropical diseases. He settled in what is now  Ghana where he established schools and agricultural schemes, travelling the region as both a missionary and a botanical collector.   When the coffee crop in Ceylon fell victim to disease, he was instrumental in introducing the Liberian coffee species there, first sending 400 seeds to Kew.  He left the Methodists, only to return later and died at his home in Accra in 1891.  His portrait by Marshall Claxton was presumably engraved for missionary purposes, and his religious activities were well-documented; according to Advolly this quite over-shadowed his equally indeed more significant role as a botanist in the heyday of heroic Victorian plant-collecting.. 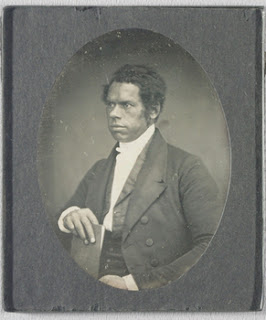 The Face of Britain- Jane Morris

figure cut out of a missal . . . an apparition of fearful and wonder- ful intensity . . . a tall lean woman in a long dress of some dead purple stuff, guiltless of hoops (or of anything else, I should say), a maze of crisp black hair heaped in great wavy projections on each of her temples . . . a thin pale face, great thick black oblique brows joined in the middle . . . a long neck without any collar . . . in fine complete.
And now he, Rossetti, was the maker and keeper of this vision, and he was shameless enough to say this in a Latin inscription painted on the top of The Blue Silk Dress. Making a disingenuous nod to her mar- riage, it declared Jane ‘famous for her poet husband; most famous for her face; finally let her be famous for my picture’.
However impassive the mask Jane showed to the rest of the world, Rossetti knew she was not indifferent; so did the increasingly tormented Morris. She came to Cheyne Walk, sittings or not. She and Rossetti shared complaints: her back; his eyesight, which had started to give him trouble; headaches, of course, on both sides; heartaches evidently, too. Partings, even for a few days, became painful. And not- withstanding the Blue Dress picture, try as he might, the painter-poet still could not contrive a picture remotely adequate to the fierce acute- ness of his gaze and the force of his desire. In January 1870 he wrote as much to her:

Dearest Janey
. . . the sight of you going down the dark steps to the cab all alone has plagued me ever since – you looked so lonely. I hope you got home safe & well. Now everything will be dark for me till I can see you again. It puts me in a rage to think that I should have been so knocked up all yesterday as to be such dreadfully dull company. Why should it happen when you were here? . . .
How nice it would be if I could feel sure I had painted you once for all so as to let the world know what you were; but every new thing I do from you is a disappointment, and it is only at some odd moment when I cannot set about it that I see by a flash the way it ought to be done. Such are all my efforts. If I had had you always with me through life it would somehow have got accomplished. For the last two years I have felt distinctly the clearing away of the chilling numbness that surrounded me in the utter want of you; but since then other obstacles have kept steadily on the increase, and it comes too late.
Your most affectionate Gabriel
Did those ‘obstacles’ include the inconvenient husband? Rossetti was painting stories of unhappy unions: La Pia de’ Tolomei featured Jane as the wife unjustly accused and locked in a tower in the Tuscan Maremma, where she died of poison; in Mariana she is depicted as the character in Measure for Measure betrothed to and abandoned by the sanctimonious sexual hypocrite Angelo.
Yet, however distressed Morris was by the obviousness of Rossetti’s infatuation, he never thought of bringing things to a crisis and forbid- ding him her company, since he knew that would further alienate his wife. An alternative was to disappear himself, and this he did in the summer of 1871, all the way to Iceland, where he set about translating Njál’s Saga. There seemed no bottom to William Morris’s put-upon good nature. Before he departed for the landscape of treeless black lava beds and geysers, he and Rossetti went in search of a country house to rent for this and, perhaps, succeeding summers. They found what they were looking for in a miraculously unspoiled Elizabethan manor house at Kelmscott, near the headwaters of the Thames on the Oxfordshire–Gloucestershire border. Rossetti described it as an earthly paradise, and so it was and still is. There were seventeenth-century tapestries in situ; a walled garden; a parliament of rooks (also still there); an outdoor privy for three (convenient, in the circumstances); and no close neighbours peering in to confirm the scandalous gossip. Rossetti brought two of the antique Chinese lacquer cabinets he had been collecting and collared the perfect north-facing studio space, where he installed his bed. Morris’s unoccupied bedroom adjoined his and, beyond it, Janey’s room. On the ground floor there wasa modest dining room and a living room with a hearth of Dutch tiles installed by Janey and supplied by the Firm.
We will never know for sure whether, once the little Morris daugh- ters were asleep, Janey or Gabriel walked through William’s room, separating them, and joined their bodies. Whatever happened or didn’t happen, Rossetti was content, playing with the girls, making lovely sketches of them, walking together down to the willow-hung river; writing his sonnets in a sun-dazed trance of love. Some of them are so heavy with sexual pleasure that it is difficult to believe Rossetti was writing from wishfulness.

Even such their path, whose bodies lean unto Each other’s visible sweetness amorously, –
Whose passionate hearts lean by Love’s high decree
Together on his heart for ever true,
As the cloud-foaming firmamental blue Rests on the blue line of a foamless sea.
When summer ended, so did the idyll. Morris came back from Ice- land loaded with runic gifts for the girls. Now, at night, the missing husband and father lay literally between Gabriel and Janey’s rooms. The House of Life, the sequence of sonnets Rossetti had written as a hymn to their passion, was ridiculed by one particularly vicious critic, who sneered at him as the founder of the ‘fleshly School of poetry’; work that was indecent when it was not ridiculous. Rossetti took it badly, had a paranoid breakdown, reached for the chloral hydrate, was taken to Scotland to avoid commitment to a lunatic asylum. There, devoted friends did what they could to restore his sanity and calm. In London, in the garden of Tudor House, the animals were behaving badly. The young kangaroo had eaten its mother; the raven had bitten off the head of Jessie the owl; the armadillos were falling prey to prussic acid laid on as bait for them in the next-door garden; and a deerhound had torn another dog to pieces. Probably none of the beasts was being adequately cared for. His friends saw the menagerie as an amusement for Rossetti, who, whatever the neglect, expected the animals to per- form entertainingly for guests. He tried coming back to Kelmscott, but the summer of 1871 was never to be recaptured. He mooched and brooded, and alternated between chloral hydrate for his insomnia and whisky to cut its bitter taste. The drug put him down and the booze woke him up. By 1874 it had become unendurable. Rossetti marched out from Kelmscott, never to return, leaving behind the Chinese lac- quer cabinets, which are still there. Two years later Jane decided she would see him no more. In her absence, stricken by the loss, Rosetti found release for his desperation in the form of a succession of great, strange paintings.
His creative imagination returned to Italy, the land of his ancestry, and to Michelangelo in particular; the old mannerist Michelangelo whose figures stare and brood, turn their elongated limbs about the pictured space. There was something about Jane’s face, almost androgy- nous, that put Rossetti in mind of Michelangelo’s prisoners struggling to get loose from their bed of stone. He painted her in entrapment: the many Proserpines doomed to imprisonment in Hades after nibbling a single pomegranate seed, the fruit painted by Rossetti with tormented vividness, the gem-like seeds lying in their split casing. The paintings were accompanied always by sonnets spelling out her mournful pre- dicament, the daylight of the earth remote in the background. Then there was Janey lost in a daydream halfway up an entangling tree, her book forgotten, a wilted honeysuckle bloom in her lap. In Astarte Syri- aca, Aphrodite’s archaic predecessor, she is turned frontally to the beholder, eyes bigger, mouth fuller than ever, the green gown much closer than usual to the lines of her breasts and thighs, as though Ros- setti was painting to remember; at once more physically present and more remote than ever.
In the last years, the alternation between chloral hydrate and whisky became extreme. Rossetti’s kidneys were half destroyed and he was in a lot of pain. By the end of the 1870s he could barely walk. Tudor House was in disarray; the back-garden zoo emptied; friends sighed when they felt they should go and see him. There were days when he lay in bed staring at the blue vases filled to the brim with peacock feathers. In the summer of their delight he had painted Janey in a for- mat small enough to fit a particular ‘beautiful old frame I have’. Her head is tilted on the long swan neck; the eyes are impossibly large, the lips impossibly full; behind her are the silvery stream, a gentle swelling hill and the gables of the house: Rossetti’s house of life. Rossetti sold it, but Jane had a good copy made. Morris’s daughter May inherited the care of Kelmscott and kept it there; you can see still see it in Janey’s bedroom, where every day she would be confronted by the look of her own inconsolable wistfulness.