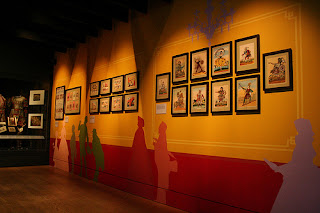 Rather belatedly but rewardingly to this year's Dickens exhibition at the Museum of London  as it is a very thoughtful historical evocation of the city that shaped Dickens and if not shaped by was certainly viewed and interpreted through his fiction  - and through his journalism, which the novels largely eclipsed. In the display  Dickens indeed acts as a linking thread to a range of 19th century materials from theatrical shows to funerals, from orphanage tickets to telegraph maps, all and more glimpses and tastes of the metropolis in its teeming, crowded, working aspects (not much here about West End or Court life). Many artists aimed to depict characteristic London streeet scenes, from comic prints of eccentric figures to crowds in railway stations and pleasure gardens, including Hicks's General Post Office: One Minute to Six. Not ignoring Whistler's masterly Wapping etchings, or Fildes's famous Houseless and Hungry, queuing on a sleety night for a bedspace in a doss-house, which made such an impact when published in The Graphic.   It is teamed here with a film created by William Raban, which observes the overnight life of today's houseless Londoners, in their cardboard bivouacs, and whose soundtrack is accompanied by a reading from Dickens' essay on his insomniac Night Walks, which told him and his readers so much about the city's poor.
More pictures from the exhibition here
http://www.mirror.co.uk/news/uk-news/victorian-london-which-inspired-dickens---675484


Yesterday I gave a very enjoyable talk at the Wallace Collection to ArtFund members about female artists in the Pre-Raphaelite movement from around 1850 to 1910, so here’s an opportunity to post two of my favourite images:

Lizzie Siddal’s painfully honest self-portrait from 1853-4, in oils, her only attempt in that medium and very creditable for its exactly-observed unglamourised self-image:  one feels sure this is what she saw in the mirror and strove to represent.  Artists’ early self-portraits are often very engaging for the element of naivety that informs prentice work – the endeavour is technically challenging, which precludes too much presentational sophistication.  Usually.  Rossetti’s early self-portrait in chalks is  a carefully-constructed image of the young artist as Romantic poet, with flowing locks. 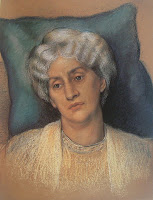 At the other end of the period:  Evelyn de Morgan’s study of Janey Morris in old age  (mid-60s) for the painting The Hour Glass, a decorative medievalising meditation on time.  Like Siddal’s self-portrait, although in no way naïve, the study refuses to flatter a figure whom Rossetti’s praise, pictorial and personal, had elevated to the status of ‘Pre-Raphaelite beauty’ despite her very evident plainness. It shows Janey’s now grey hair, her heavy brows and strong features, with an expression of inward anxiety, hinting at distress, which corresponds to her features in repose as shown in photographs.
Both Lizzie and Janey lacked vanity and had no delusions about their alleged ‘beauty’.  It’s a pity people persist in perpetuating the myths.  But that of course is what Pre-Raphaelitism is all about.
Next up: a talk on Pre-Raphaelite women artists in the Isle of Wight.   Not the best-known aspect of the movement, but worth exploring.
Posted by Jan Marsh at 18:36 No comments:

I  frankly did not expect much from Eden Camp somewhere north of York, and the grand-daughters agreed mainly to please the grand-sons, who had brought a large arsenal of nerf guns on their visit.   So it's pleasant to report that the museum of unpleasant themes is very effectively organised. Each hut features a different topic,  only clearly evident when one opens the door. Many start in darkness, suggesting the descent to Avernus and creating a mystery tour, in narrow dog-leg passages between waxwork scenes with historic items, dramatic sounds, smoke and smells, and simple but  gruesome special effects.   The wall-cases are packed with objects, posters, photos and personal items but you don’t need to linger to look at it all, and you are back in the open air well before overload.    Nothing very high-tech – indeed, rather endearingly low-tech -  and all the more effective  for children accustomed to electronic games and violent videos with endless explosions. In fact, the younger children were sometimes too scared to go right into the hut, and the older ones were swift to spot the mock-ups of twitching body parts and drowning submariners.   Unlike films and games, this place definitely unglamourises war.
The food ration lists made a big impression, as did the morse-code signals.   Visitors were more or less equally divided between boys and grandparents  (who could probably remember rationing and air raids and dads in uniform, and were not attracted by the basic menu and cooking smells of the wartime-canteen style café).    Bafflingly, there’s no information on who owns, runs and devises the museum: it seems to have sprung from or settled in farmland rather in the manner that the camp was first placed there.
Posted by Jan Marsh at 19:34 No comments:

A fairly swift visit to Yorkshire Sculpture Park, with grandchildren whose chief ambition is to climb sculptures as well as walls, fences etc., but who are alas seldom permitted to do so  (it might be good if YSP had a sculpture playground with items designed for climbing and jumping - in fact many current pieces of play equipment resemble bits of contemporary sculpture and the two would combine well).

Vast spaces here and plenty of opportunity for installations to surprise and delight, though some promise more than was delivered - for example James Turrell's SkySpace, within the hillside behind an original deer shelter, which offers an intriguing blind entrance into 'a large square chamber with an aperture in the roof', rather like a light-filled dungeon.
This allegedly transforms the open sky into a trompe l'oeuil painting and creates a space for tranquil meditation. But must have been designed for somewhere like Arizona.  In chilly April sitting on rain-damp concrete benches looking up at scudding clouds does not appeal for more than 30 seconds.

One of Gormley's figures perched on a tall dead tree trunk is more effective, especially when viewed from ground level.  The Miro bronzes work well on the formal terraces, in lively reference to their Renaissance predecessors.  The picture below right conveys our weather accurately.

Owing to wind and rain and hail we did not explore at leisure, or have time to assess the deftly-positioned visitor centre, so there is much scope for re-visiting. It's amazing value at £5.00 per car and the open, relaxed, unpoliced atmosphere is very attractive.

Not surprising that the centenary of its sinking should prompt wall-to-wall coverage, especially since dramatisation revived interest in this ancient disaster story.  But what exactly is it that arouses such obsessive interest in these numerous re-tellings and re-imaginings - books, movies, TV, even this week's bizarre 'memorial cruise' retracing the ill-fated voyage - when other catastrophes do not?  Only the volcanic obliteration of Pompeii seems to exert a partly comparable fascination; certainly there seems no appetite for replays of the South Asian or Japanese tsunamis, with similar suddenness and far greater death-tolls. 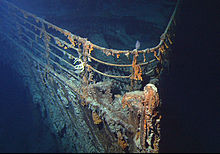 I have little interest in the Titanic story per se but its reach is so great (presumably audience- or market-driven)  that one can hardly help knowing more than one needs to.  And I recently read Frances Wilson's book How to Survive the Titanic, which rehearses the familiar but still compelling tale through one significant survivor, White Star Line director J. Bruce Ismay.   It's an effective device, allowing due emphasis on the minute-by-minute narrative, on the social status of the first-class passengers and on the immediate public shock and recriminations.  These features - the speed with which the disaster unfolded, as if designed for movie or book related in real time,  and the class inequalities of those on board - do appear the main if not wholly sufficient reasons for subsequent and still-growing Titanicry.  A collective schadenfreude is surely also at play, revelling in the hubris of some plutocratic victims whose wealth was of no avail, as well as a form of silent tribute to the mostly unrecorded final moments of those passngers and crew who drowned, rather similar in manner to that for 'the fallen' in 1914-18.  Unfortunately the deeper themes of forfeited honour, survivor guilt, even trauma, were not to be found in J. Bruce Ismay's life and character, or rather were buried too deeply within his inexpressive self, both public and private.   Seldom has a historical figure seemed more like a waxwork.  Wilson's ambitious yoking of Ismay's fate, in the courtoom inquiry and subsequent obscure retirement, to that of his fictional precursor  Conrad's Lord Jim is rather forced, given Ismay's
marginal role in the disaster and might have worked better in a different narrative structure.  In the end the relentless censure of Ismay drives the reader almost to pity for this human iceberg.
Posted by Jan Marsh at 13:42 No comments:

End of an era last weekend as director Nick Kent retires from the Tricycle Theatre in Kilburn after over twenty years.  Though the Tricycle produced a wide range of comedy and drama on Irish, Jewish, South African, American and Caribbean themes, Kent's reign will surely be remembered for its presentation of political theatre during the 90s and 00s when political engagement more or less vanished from mainstream stages. 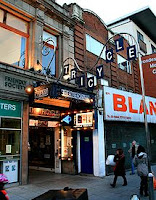 And especially for pioneering a type of documentary political drama based entirely on factual records, trials, public inquiries and personal testimonies -all the more dramatically effective for their dispassion without polemic. Srebenica, Guantanamo, Bloody Sunday (the Saville Inquiry), the Hutton Inquiry into the death of David Kelly, Tactical Questioning into the death of Baha Mousa in Basra - all topics which need concentrated retrospective public attention  and don't usually get it, many brilliantly crafted from transcripts by Richard Norton Taylor. The most memorable must be The Colour of Justice, replaying the inquiry into the death of Stephen Lawrence and forcefully demonstrating the continuing need for outrage and investigation.     So

AVE ATQUE VALE
a great achievement and example to follow.
Posted by Jan Marsh at 19:41 No comments: