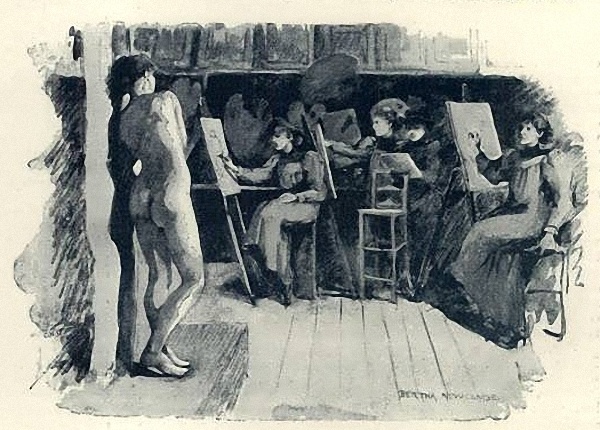 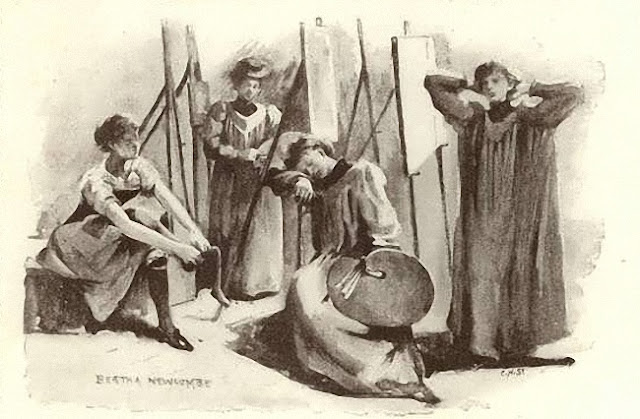 evidently exhausted by concentrating on that male anatomy all day....
Posted by Jan Marsh at 18:19 1 comment:

On 8/9 June, the BBC World Service will broadcast a radio documentary about Martha Ricks, 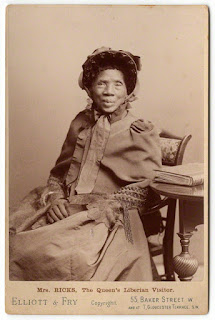 18 July 1892
who travelled from her home in Liberia to London, bringing a silk embroidered 'Coffee Tree' quilt as a gift for Queen Victoria.    The cabinet photo above was taken by one of the two photographic studios to produce and sell images of the celebrity visitor, whose trip and reception at Windsor Castle attracted public and media interest.

The Republic of Liberia, established by African-Americans in 1830,  was recognised by Britain in 1847.  Throughout the transatlantic world, Victoria would later be honoured for opposition to slavery and personally credited with having made British territory such as Canada a refuge for those escaping enslavement.  On this occasion, Victoria relaxed diplomatic protocol to receive Martha Ricks as an individual, graciously welcoming her to Windsor, together with the widow of Liberia's first president,  and formally accepting the gift.

The public attention may have facilitated this audience so soon after Ricks' arrival in the UK, as her visit was widely reported.   It must also have  been assisted by the equivalent of the Palace's press department, as the Graphic newspaper was allowed to send  illustrator Reginald Cleaver to record the event, his image of the Court looking on as Ricks and Victoria shook hands being printed on the front page of the Daily Graphic, and a second view, from the opposite angle - where  Ricks is shown from in front - on the weekend edition.
.Much more on Martha Ricks from Jeff Green here

The BBC World programme is made and presented by Penny Dale.

which is newly-opened after intensive care.  On SpitalfieldsLife  are some great photos:
the wisteria is wonderful

tomorrow  I  am giving a talk at the Whitstable Literary Festival, which is dedicated to the Bloomsbury Group and to Vita Sackville West in particular, whose ancestral home Knole is not far away.
I intended to talk about Vita and her portraits, and am indeed starting with those. 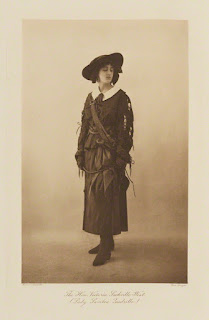 Here, for example, is a curious image of the Hon. Vita in 1911,  when she donned fancydress for a 'Shakespeare Ball' on the eve of the coronation of George V.    It took place in the Albert Hall and dozens from high society took part.    Commercial photographers took and published many of the images, which show that many, maybe most of Vita's fellow performers chose Tudorbethan costumes, in keeping with the theme.  Vita evidently did not follow the late-medieval trend,  but which Shakespearean character is she invoking?  it ought to be Rosalind,  but  the hat and particularly the skirt don't seem to fit that role....


I am also aiming to look at images of Vanessa Bell, which I have not previously seen. 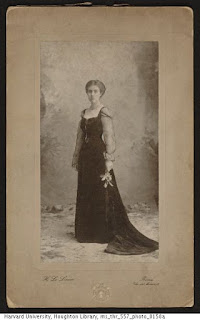 These two photographs , from one of the many photo albums filled by Vanessa and Virginia, were taken in Rome by a professional studio run by Henri de Lieure. They apparently date from 1904, though I can't find references to Vanessa visiting Rome then.     They seem untypical images of Vanessa  and at first I thought the one with the lattice chair-back was a photo of a painting, given the soft focus that emulates brushstrokes.  But as Vanessa is wearing the same gown in each image, I assume the effect is a bit of  early photoshopping, such as the Stephens sisters' great aunt Julia Margaret would have appreciated had it been available for her pioneering photographs.
I wonder if Vanessa's companions on this trip, whoever they were, also  sat to Lieure.
then there is this striking portrait of Vanessa by Roger Fry, which is just published in the British Art Journal by Martin Ferguson Smith, together with a hitherto unknown drawing of Fry's wife Helen and a snapshot of Vanessa standing naked against chalk cliffs in Dorset.
The painting, in gouache over pencil outlines, shows dramatically the Post-Impressionist impact on Bloomsbury portraiture. 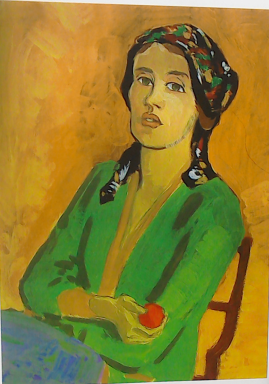 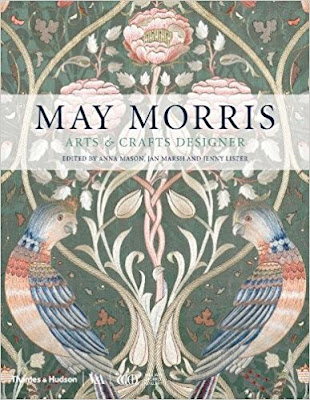 The first fully illustrated introduction to May Morris, a leading contributor to the Arts and Crafts Movement and daughter of famed designer William Morris
May Morris, youngest daughter of influential designer William Morris, was one of the leading female contributors to the Arts and Crafts Movement. She ran the embroidery department of her father’s famous firm Morris & Co., and had a successful freelance career as a designer, maker, and exhibitor, founding the Women’s Guild of Arts in 1907 and undertaking a lecture tour in the United States between 1909 and 1910. May’s approach to embroidery was innovative and widely influential in the UK and abroad, yet her important contribution to embroidery is often overshadowed by the accomplishments of her more famous father. 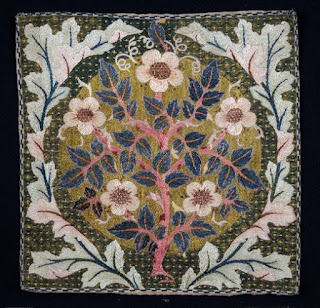