"THE GREAT advantage and charm of the Morrissian method is that it lends itself to either simplicity or to splendour.  You might be almost plain enough to please Thoreau, with a rush-bottomed chair, piece of matting and oaken trestle-table; or you might have gold and lustre (the choice ware of William de Morgan) gleaming from the sideboard, and jewelled light in your windows, and walls hung with rich arras tapestry".

A glimpse of Maria Zambaco 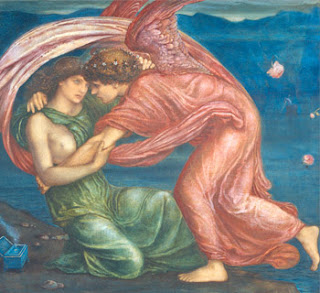 When Maria Cassavetti Zambaco returned to London from Paris in 1866 after leaving her husband, her mother is said to have arranged for her to sit to Burne-Jones for a portrait - hence the start of the notoriously disruptive romance that involved an abortive elopement and suicide pact.   The subject of the portrait was the legend of Cupid & Psyche, which EBJ  had been illustrating for a few years in relation to William Morris's project for an illustrated Earthly Paradise - eventually issued without pictures.  It's not entirely clear which of the several existing images was done for Maria's mother, but of course this was also the start of a very long sequence of obsessional images based on Maria -  drawings, oils, portraits -  which testify to her emotional impact on EBJ and imply long sessions in the studio.
Perhaps from the start, although later obscured by  friends' reluctance to stir the scandal publicly, the arrangement was for EBJ to also teach Maria to draw, so she was not only sitting to him but studying and working alongside in his studio - a realm from which Georgie BJ was firmly excluded [and had been from the early days of their marriage].  The evidence indicates that artist and model were together  here twice  week for several months, maybe over two years, and that to limit the gossip, Ned's other friends were discouraged from dropping in on those days.
It seems that nevertheless, fellow artist Charles Keene snatched a swift sketch of Maria at the easel, which he later used for a small etching, showing her drawing (was she left-handed, as shown?). 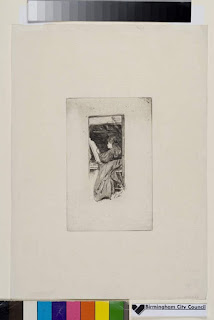 It's unclear how many prints were made by the artist from the original - the British Museum and BMAG have copies, and in 1902 it was included in a published portfolio of Keene's work.  And although its date of execution is unrecorded, it can be compared with a thumbnail sketch of Maria by EBJ, evidently also done in his studio. Here she is reading, not drawing, but her garments and unbound hair are very comparable: 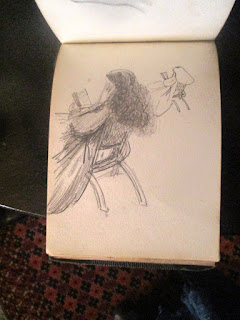 In letters and memoirs are occasional references to Maria's own artworks, allegedly derivative
copies of EBJ's style (as would be expected from a student).  They all seem to have vanished from view however so one can't tell if this is true or slanderous; it would be good to see an example.
Some good few years later Maria forsook drawing for sculpture,  studying with Alphonse Legros at the Slade and with Rodin in Paris.  She produced and exhibited firstly portrait medallions including one of her cousin Marie Spartali, and then at least one free-standing desktop bronze piece, which she exhibited in Paris under the name of Cassavetti, presumably because her hated husband was now a celebrated medical expert in the city.  The only image shows that rather poignantly it is a figure of Cupid or Eros stringing his bow, entitled L'Amour irresistible, the subject zooming right back to the Cupid & Psyche and the outcome of her earlier encounter with Burne-Jones. 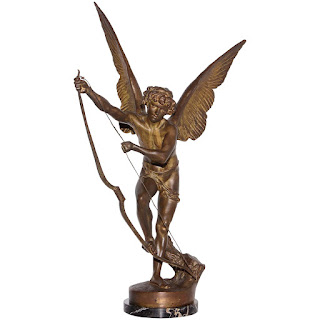