A somewhat belated post with an image of one of the paintings in Tate Britain's recent exhibition IMPRESSIONISTS IN LONDON  which on the pavement to the left shows an elderly Indian street sweeper wearing a red turban, alongside a policeman.  Possibly included on account of the turban, the wintry street scene wanting in colour, but also an authentic glimpse of mid- to late-Victorian London.
It is one of a series showing London streets commissioned by banker Kaye Knowles.
Posted by Jan Marsh at 19:02 No comments:


A brief report on some concerts in the Loch Shiel music festival last week in various venues around Lochaber
Most notably under the arches of the famous Glenfinnan viaduct.  Rather hard to get performers and arches in the same shot.  A trio of tubas joined by students from Lochaber schools aged 11 to 18 on trumpets and trombones.  Audience on the hillside, or perched on rocky outcrops. 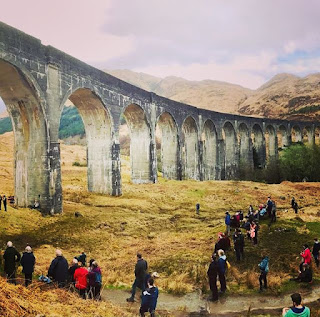 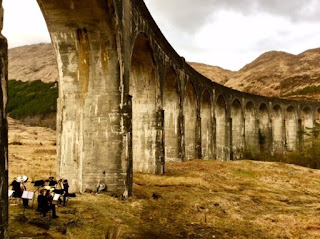 The following day, the New Antonine brass ensemble in a sort of open-air treetop cabin up in the Salen forest, which because we arrived late we had to locate aurally, following sudden trumpet and tuba sounds heard from below.   In fact, this was a rehearsal - we got to hear the whole exciting programme, including  the French horn playing a way off among the trees, as if in hunting mode. 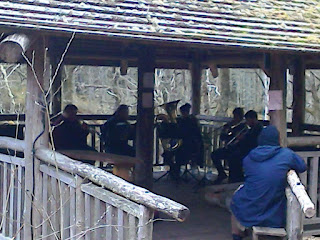 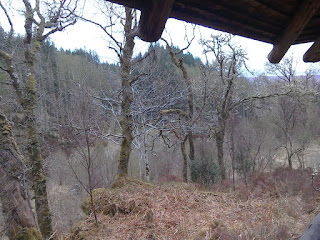 The atmosphere was not as damp as the photos suggest - the air must have been much colder than it felt.  And it was a wonderful experience, lost in sound high up amid trees.
Posted by Jan Marsh at 15:45 No comments:

by Nicholas Penny, from article in recent issue of Apollo


Among museum professionals, a curator has for many decades been understood as someone who is responsible for the care, display and interpretation of specimens, artefacts, or works of art in the permanent collection of a museum or gallery. During the last 20 years, temporary exhibitions have become increasingly central to the activities of almost all institutions of this kind, and many curators are now largely absorbed by the mounting of such exhibitions. Curators are only likely to attract media attention by this means, and such impresario curators are almost always the ones who are proposed as future directors. Indeed, a curator is now more commonly understood to mean someone who organises temporary exhibitions of the visual arts, whether in a private or a public institution


It has often been argued that senior administrators are better qualified than traditional curators to serve as museum directors, but nowadays the trend is to appoint impresario curators, preferably those who are comfortable with contemporary art and, if a new building is planned, have some confidence in dealing with architects. Directors with no curatorial experience and without the related expert knowledge of art tend to diminish the value of such experience and expertise out of their own insecurity. The results can often be devastating, even if, being of little interest to journalists, whose attention is usually focused on the exhibitions programme, they generally go unnoticed by the public.


There are fewer internationally recognised experts among the curators of London’s museums than was the case 25 or 50 years ago. The curatorial staff in regional museums in this country possess only a fraction of the knowledge of their collections than one would have found then. There are major North American museums in which only one curator cares for the historical collections, where there were formerly four or five. At the convivial gatherings of international museum directors that I attended between 2008 and 2015 the voices of directors who openly disparaged the scruples of traditional curators and the concerns of conservators were increasingly confident – and indeed the original motive for such gatherings was precisely to make international lending easier, that is, to promote the increasing emphasis on loan exhibitions within institutions that were formerly chiefly associated with permanent collections.


Senior administrators have not often been appointed as directors, (although, as mentioned, their eligibility has often been discussed) but their status within the museum hierarchy (which includes IT, HR, PR, and many other new growths) has increased hugely and they will be detected in the shadow of any impresario director. Sometimes they are loyal, self-effacing and truly efficient. The model, significantly, is one which is more common in the performing arts. Curators are thus ‘relieved’ of many of their former responsibilities, encouraging the trend whereby some become ‘scholars in residence’ and others concentrate on exhibitions. The admirable special training now available in both in the US and the UK to equip curators with more experience of administration and management has been designed to combat this state of affairs, and excellent directors will be found among the curators who have benefited from such courses. But there is no reason not to look elsewhere as well.


In the 19th century it was widely believed that any director of the National Gallery in London must be a practising artist, and the same applied in equivalent institutions throughout Europe. It is easy to imagine – and should not be so hard to find ­– a director with an academic background, especially perhaps a historian, who values the experience and knowledge of his or her curators.


In a large museum with many different departments a curator will be suspected of having a prejudice in favour of her or his own special field of experience and expertise, or at least an inclination to give priority to art over archaeology, for example, or modern and contemporary preference over everything else. Even in a gallery with a collection consisting only of European art there are often no curators with the wide interests and sympathies that would enable them to assess the needs of the collection as a whole. The necessary range may also be more easily found outside the curatorial body. On balance the rise of the impresario director should be seen as more of a threat than the appointment of someone without traditional curatorial experience.