From In A Tuscan Garden, published anonymously 1902


Old Italian villas, about which so much has been written, and to the idea of which so much romance clings, are, as a matter of fact, gaunt, barren, hideous structures outside, and conspicuous for every kind of inconvenience within.  You never see a creeper of any kind planted against their walls to soften their staring outline, and they have a desolate, forlorn look, in strong contrast to our own lovely English houses.  For the most part, they are let in separate floors to different tenants; those who occupy the ground floor have the right of access to the garden, but no further interest in it, as it invariably remains the property of the proprietor.  Some years ago, when the late king of Würtemburg rented the beautiful old villa of Quarto, near Florence, he was greatly surprised at finding he had to pay the gardener for every bunch of violets gathered.
This arrangement of letting in flats has, for its practical result, that, if the various residents manage to avoid quarrelling with each other on vexed questions of entrance-stairs and water-rights, their domestics will infallibly do it for them.  We were, therefore, extremely anxious to find what is rarely to be met with, except in the wilds of the country, viz., a small house with a piece of garden attached to it, of which we should have entire and sole control.
We had seen such a place in a quite ideal situation in the neighbourhood of Carrara. It lay in a sheltered corner on grass terraces, just beneath an old convent, shut in behind by snow peaks and with the sea in full view about two miles distant.  The climate in this part of Italy is delightful, never very hot in summer, and mild enough in winter for lemon-trees to stand out without protection.
This place had been occupied for some years by an English family from motives of health, and their object having been obtained, they were about to move on to a more active “sphere of influence”.  The house was in a most tumble-down condition, and its tenants told us candidly they were often obliged to sit under umbrellas, as the owner was so deeply in debt to the local tradespeople that they would not execute any repairs for her.
We stayed for a week at the little country inn at the town near where this house was situated; the food provided was, as an Italian friend described it, “a shock to the stomach”, but we wanted to look about in a  way that could not be accomplished in day trips.  I knew that if I rented the place for some years, and put it into habitable repair, we should be charged a fancy price for all our improvements.  Accordingly I drew up a most elaborate document, providing for a lease of a certain number of years, with a  purchase price at the end, should I wish to become the owner.  The Italian lawyer, into whose hands I committed the matter, was filled with admiration at the intricate nature of our proposals, which the lady would probably have been forced by her creditors to accept – but, just as this juncture, she was about to contract a second alliance with a Bentivoglio di Bologna (there is a fine medieval ring about that) and could afford to snap her fingers both at creditors and legal adviser.

from In A Tuscan Garden, published anonymously 1902.


“Open my heart and you will see / Graved inside of it Italy, / Such lovers old are I and she, / So it always was, so shall ever be” – Robert Browning.
In the far-off years of the sixties, when the Italy fever took me very badly, so badly indeed that I have never succeeded in quite shaking it off, I would have echoed unreservedly those lines of Browning’s. In those days poetry was very much to the fore, and the joy of all that was opposed to the conventional British type was great.
But, as the years go by, cameras get shifted, and perspectives alter considerably, and I have to confess that every year passed out of England makes me more hopelessly British.
A long residence in Italy gives an intimate knowledge of her people, her standards and her morale generally, under the influence of which the poetry becomes less prominent, and what may be called the seamy side is apt to come painfully to the front.
But in spite of all, to those who have once yielded to its charm, it ever remains the enchanted land.  Browning, indeed, in his later years broke the chains of the sorceress, and took up the duties of good English citizenship; but that was after he had sounded the depths of his popularity with his own countrymen, whom he once grimly addressed as “ye who love me not”.  To him might be applied the antithesis of old Pio Nono’s verdict on a certain diplomat – “that if not a good Catholic, he was a worse Protestant”, for Browning, if a good Italian, was certainly a better Englishman.
The Englishman who lives in Italy today might do worse than bear in mind the just proportions of the relative values of patriotism.
I once heard a man say reflectively, “Think of living in Italy, when you might have it to go to.”  He expressed a great truth, for it is certain that wherever we do not live, there we find our best holiday.
It is not easy in any country to discover the ideal residence that suits all one’s requirements – situation and rent included.  In Italy, if you are looking for a town habitation, you may find what you want with perhaps greater ease than in any other country.  But the moment you go beyond town walls and boundaries your difficulties begin.
Posted by Jan Marsh at 18:14 No comments:

and  a catch-up chance with  some [very] old titles and other relatively new fiction including Salmon Fishing in the Yemen and  The Stranger’s Child, Alan Hollinghurst’s novel chronicling homosexuality in 20th century Britain.  The latter begins in 1913, with a handsome Cambridge poet named Cecil Valance, modelled on Rupert Brooke, who likewise dies in WW1.
I was intrigued because my DPhil was based on this period and this poetry, transitional between the weighty Victorians and the startling Moderns, which sought and half-achieved a new voice before being eclipsed  by the war and consigned to critical oblivion thereafter.  Sadly, Hollinghurst’s characters take the same view, but it was cute to read of Valance’s most famous poem being first published in New Numbers.  (Possibly a mistake to give Valance some of Brooke’s key attributes, including a mother nicknamed the General in homage to Brooke’s Ranee, while also making Brooke his university acquaintance, alongside Lytton Strachey.)  The linking story is of memories and versions of Cecil’s sexual biography, as in many books about Bloomsbury, but though the page-turn seems to be will-he-won’t-he be outed,  there is no dramatic revelation.  As the reader knows from the opening narrative that Cecil was actively if not exclusively gay, it seems perverse to conclude with an unresolved debate between his (gay) biographer, who asserts it, and family members who call the biographer a fantasist.  But I loved the patchwork account of biographical interviews, travels  and researches, hunting and stitching fragments to camouflage missing pieces.
Posted by Jan Marsh at 15:06 No comments: 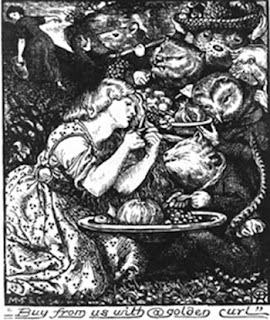 There is no exhausting the sources that may have shaped Goblin Market.  I've just been reading Mary Cowden Clarke's The Girlhood of Shakespeare's Heroines  published in three vols 1850-52 in which she created prequels for fifteen female characters.
I am struck by a parallel between Christina Rossetti's tale of Laura and Lizzie with that of Cowden Clarke's Ophelia and her rustic companion Jutha. [ Ophelia, as you did not know, was fostered with a peasant family while her parents served as Danish ambassador and wife in Paris.]  Daily Jutha and Ophelia wander the fields and woods, until they meet a fine nobleman out riding, who dallies with and seduces Jutha;   pregnant, she then pines and dies.
It's only a fore-echo of Goblin Market, but one can imagine Christina reading Clarke's book to the girls she taught in Frome and at Highgate Penitentiary, and then 'borrowing' some of its elements when her poem about temptation and seduction was conceived around 1858-9.
Posted by Jan Marsh at 21:43 1 comment: 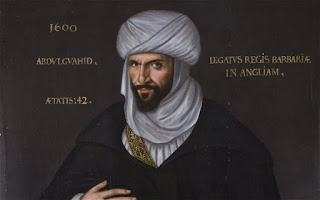 According to the info panels in the British Museum's current exhibition on Shakespeare's world, there were about 900 people of African ancestry among the estimated London population of 200,000 in the late  Elizabethan era.

Despite the infamous order authorising the deportation of all blackamoors (which seems never to have been implemented) the documentary and/or visual evidence for these residents  is  as yet meagre, although steadily growing.  So it is very good to see a seriously informative presentation of the African presence, via direct and indirect means, including the fine portrait above (three-quarter-length in full frame) of the Moroccan ambassador to the court of St James - predecessor of the envoy so discourteously thrust into the debauchery of Charles II's palace at Whitehall.

It is also excellent to see the unidentified man in the earlier portrait by Jan Mostaert now in the Rijksmuseum  - justified by the global scope of the exhibition, arguing that travel and trade, exploration  and migration meant that London was connected by all kinds of cross-currents, whose effects are visible, or rather verbal, in Shakespeare's plays, in their diverse settings, allusions, characters, plots and imagery, which range far and wide.

Thus, also, an example of the Renaissance fashion for black marble blackamoors, like this head  from Rome by Nicolas Cordier. 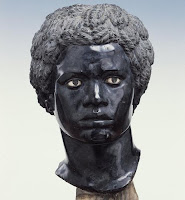 As these are not the only Africans to feature in Staging the World, and there are several other equally interesting topics explored, you can see what a rich and absorbing exhibition it is.  Compliments to the curators.
An added bonus:  by centring the show on Shakespeare, all the topics including the Black presence, appear mainstream rather than marginal.
Posted by Jan Marsh at 22:41 No comments: