I am just reading Light Falling on Bamboo, a novel based on the life of the Trinidadian artist Michel Jean Cazabon (1813-1888), by Trinidad-born writer  Lawrence Scott, and am rather ashamed that I was not aware of Cazabon’s career, as I did once search for nineteenth-century views of the Caribbean, to see what images were being produced for (as I assumed) the European market. 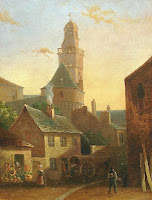 Cazabon was the son of free black   property-owning parents originally from Martinique.  He attended St Edmund's College, outside Ware, and then studied under Paul Delaroche in Paris, exhibiting at the Salon before returning to Trinidad.  Scott’s book is fiction, owing to the lack of letters, memoirs or other records of Cazabon’s life. He married a Frenchwoman and his work indicates sympathy with the Barbizon school of ruralist artists like Corot and Millet and their concern with the effects of light;

in the Caribbean, landscape-with-figures seems to have been his dominant subject, though I don’t know enough to summarise his output.

Coincidentally, this week I just caught the end of the National Gallery’s summer exhibition based around Titian’s Diana and Actaeon  series, which included backdrops for Covent Garden’s ballet series Metamorphoses by Chris Ofili, who now lives and works in Trinidad.

I learn that several of Cazabon's pictures are at the former home of the governor of Trinidad in Cazabon's time, Lord Harris, in Kent.  How intriguing.

PS    Lawrence Scott will be talking about Michel Cabazon at Belmont House, Throwley, ME13 0HH at an event hosted by High Commission of Trinidad and Tobago to celebrate Cabazon's bi-centenary on Saturday 6 July from noon.
Posted by Jan Marsh at 19:32 No comments:

The new BRONZE exhibition at the Royal Academy is very splendid, ranging as it does from pre-history to the present day and globally east-west-north-south.  It's disappointing  and surprising however to see nothing by Elizabeth Frink, a sculptor who dealt so vigorously with the medium, in most of  the exhibition's categories - figures, animals, groups, gods, objects, heads.

Frink's Tribute Heads are evident heirs to Graeco-Roman ones, while her Front Runner would make a lovely companion to the mutilated Dancing Satyr which was dredged from the Sicilian sea just a few years ago and opens the show in a space all to itself. 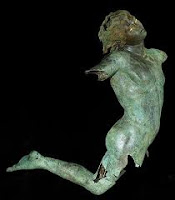 
see this third leader in the Guardian

better something than nothing, but don't jump to think this token presence does justice to women artists' contribution to the movement

A swift alert to one appealing aspect of the new Pre-Raphaelites exhibition at Tate Britain - the inclusion of several sculpted works by Alex Munro, an unjustly neglected member of the original circle 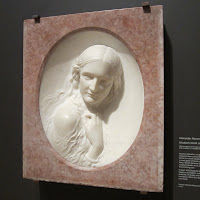 .   An especial addition to the canon is a lovely marble relief portrait from 1859 of Elizabeth Smith, wife of Charlotte Bronte's publisher.  Delicately carved, the head, shoulder and hand emerge from a concave oval at a slight angle, as if the sitter were leaning towards the spectator.  The work has been in the Scottish National Gallery for just five years and deserves to be well known.  Check out also Munro's bust of Dante, its simplified dignity a telling contrast to the fussy gothickry of John Hancock's bronze figurine of Beatrice.
Posted by Jan Marsh at 10:09 No comments:

From In A Tuscan Garden, published anonymously 1902
Some friends, living at a considerable distance from where we were, wrote to us, saying that they thought we might find what we required in an old villa in their neighbourhood which had just been put in order – Italian order – for letting.  Accordingly we left home early one morning to inspect this particular house, and to explore the neighbourhood generally.  The place we had come so far to see was a rambling, old-fashioned farm-house, situated on a hill; the ascent would soon have knocked to pieces woman or beast, and it was away from any main road – it would have been admirable for a man and his wife wishing to rear a family of boys and girls in a back-woods kind of fashion, but we were not prepared to accept that kind of existence.  Its one merit was the extremely small rent asked for a whole floor of good rooms; but, as I ran my eye over them, and took stock of all that would have to be done before these were habitable according to English ideas, I felt that the cheapness was of the kind likely to be very expensive in the long run, - so, much regretting the lost time and trouble, we prepared to return to our own part of the country.  But, thinking it a pity not to vary our route, we struck, rather at random, through various fields and lanes, exploring more than one tenement as we went along, and finally arriving, very hot and tired, at a small village of a not very inviting aspect.
In my time, in the “good old days”, the fashion for English people to inhabit country-houses in the neighbourhood of Florence was almost unknown.  Here and there an Anglo-Italian, settled in Italy for business or other reasons, might own a property on which he would spend a few weeks in summer.  But the English in those days had not spread themselves over the face of the land, as they have since done, consequently I was quite ignorant of the lay of the land, or of where we were, or how far distant from Florence.  A few steps ahead of us some large iron gates stood open, disclosing a long avenue thickly planted with trees.  I pointed this out to my companion and suggested our exploring it, to see what might be found within.  She, being very tired, and somewhat cross, protested loudly: “I cannot think,” said she, “what makes you want to go there.  It is evidently private ground; no one else does such things.”

Far and away the best thing about these Games has been the amazing springy legs now used by those who’ve lost their own.  It’s not just that the athletes can now run 100m in a few seconds but that they can stroll, skip and apparently dance with as much if not more agility than the able-bodied. 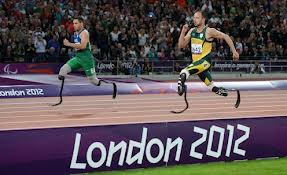 I’d never seen these bendy, bouncy blades before and hope they are as easy to use (and available) in everyday life as on the track – and that those who invented / developed them enjoy global acclaim.  Sport is of course A Good Thing, but this is truly astounding.
Posted by Jan Marsh at 10:24 No comments:

From In A Tuscan Garden, published anonymously 1902
So we missed the chance of becoming landed proprietors.  It was one of the very few places I have ever seen that I wished to possess, but it was in a singularly lonely and unprotected situation, and some years later, when socialistic troubles and disturbances were more pronounced in that district than in any other part of Italy, I felt that it was perhaps fortunate that we were not in such an isolated position, and in a neighbourhood so renowned for the lawless violence of its inhabitants.  All our friends had remonstrated at the idea of this retreat from British civilization; and everyone begged us to look about in Tuscany, in the neighbourhood of Florence, before coming to a decision.  We settled ourselves for the summer in the ground floor of a wonderful old villa, near Michael Angelo’s Fortezza, dating back to the days of the Republic, belonging to a Romagnuolo, a brother-in-law of Aurelio Saffi.
An extraordinarily mixed group of people tenanted this house, which had various outlets, and while one door opened on a steep Costa, another, far above it, led into a charming garden from which our apartment was entered.  In one corner a widow with a family of daughters had a quartiere.  The girls were umbrella-makers by trade, and formed a picturesque group at work in their small courtyard.  A post-office clerk had a bedroom in another part of the house, a lucky thing for us, as he used to bring up our letters and papers late at night, when he returned from his bureau.  This worthy made a futile attempt as a watery grave, owing to some unsuccessful love-affair, but the only results were a good ducking, and our landlord getting into a rage at his folly and turning him out.  On the floor above us lived an Italian officer with his wife and child, and in an old tower on the top of all dwelt the padrone di casa and his foster brother, who attended to all his wants.  The old gentleman dressed himself every day at five o’clock, and departed to his café, where he invariably spent his evenings.
A goat roamed about the garden, and lovely white pigeons used to fly in and out of the big vaulted  chamber which was our drawing room. I took this quartiere for the summer months, just to have some kind of pied-à-terre.  My companion was going over to England, and I felt that if I was bound to be dull, it was better to be so within reach of books and one or two old friends, than alone in a  mountain retreat.
Delightful as this place was as  a summer abode, we felt it to be hopelessly unsuitable for a permanent residence for Inglesi like ourselves, requiring warmth and comfort indoors, for we well knew how piercingly cold the Tuscan winters could be.  So we began to hunt about in the hot June days, resisting all the offers of our old padrone di casa : - he would give up his own sunny rooms in the tower, - and build an inner staircase to them from our apartment, anything, in short, in the brick and mortar line, if we would only remain.  No Italian landlord can bear to see so desirable a possession as an English tenant leave his house without making an effort for retain him or her as the case may be.