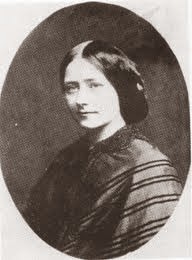 I’m reluctant to criticise when so much effort was put into historical accuracy, but there were several levels on which I found the film about Charles Dickens and Ellen Ternan disappointing -  one of which, ironically, was that of keeping over-close to the (very scanty) known facts.  Since virtually all that is known of the affair is that Dickens fell for Nelly in 1857, kept the relationship secret, using the name Tringham and a sequence of clandestine homes, and left her comfortably off when he died in 1870, the romance is entirely open to imaginative reconstruction, which is what drama can do. Dramatically, however, the film offered a rather reluctant, often sulky Nelly, who appeared the victim of a worldly pact between her mother and her paramour, and lived with lifelong, emotionally torturing regret (cue thrumming music) in a curious, psychological re-working of the Victorian moral code that predicted gloom if not doom to all women who ‘strayed’.   It was hard to see what pleasure either she or Dickens got from the affair as reconstructed - seemingly an unlikely scenario given Dickens’s over-weening sense of omnipotence, entitlement and impatience, and in filmic terms somewhat dull, despite a dead baby and a rail crash.

That’s Nelly above, in 1858, and Dickens below in the same period. 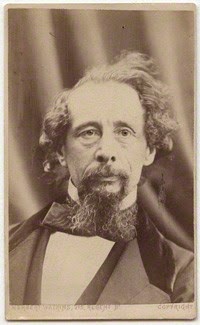 I myself guess he was initially smitten by her girlish spirits cultivated through stagey ingénue roles, plus the admiring adoration he inspired in all on whom his favours were bestowed, and that later he enjoyed the make-believe of a dainty, loving wife in a cottage – there are a few such scenes in his novels  – and relished his celebrity success in keeping her a secret.  Perhaps to Nelly this was a happy, well-paid role to play offstage.     But that’s just one scenario; and whatever the possibilities, drama requires a compelling plausibility beyond that of lookalike make-up, costumes and creditable acting – which The Invisible Woman has in quantity, and to spare - great design, period detail and acting all round, so a pity the emotional dynamic was weak.  I thought, also, that the title went under-utilised; with Ternan’s story being so hard to document, her voice so silenced, her feelings unrecorded, in contrast to Dickens’ public life and posthumous fame,  the sense of her invisibility to contemporaries and posterity is a potent idea that could have been visually effective in a hide-and-seek manner as well as dramatizing the glimpses that history does vouchsafe.  To non-Dickensian moviegoers, the title must seem rather baffling.

I do like afterlives, fictional and factual. It seems perverse to complain of over-literal interpretations, but whatever the format, one also likes insight, imagination, formal flair, storytelling. And, in a movie, visual storytelling and flair.

Who was cast as "Uncle Tom"?

Years ago, when I first researched Black Victorians,  I trawled through the catalogues of the annual Royal Academy exhibitions for  titles that suggested 'Black' sitters or subjects. ['Head of  a Negro'  and 'Othello' were quite frequent.]  I swiftly found that after the publication in 1852 of Harriet Beecher Stowe's  Abolitionist novel Uncle Tom's Cabin, scenes from the story became suddenly popular.
Furnished with the artist's name, further research might lead to the painting, although in all too many cases the proliferation of minor artists in the period meant that both they and their works languished in oblivion. Even for better-established painters, very often works are unlocated, unrecorded anywhere since their first appearance.  So it was gratifying when, shown the canvas here, by Thomas Uwins: 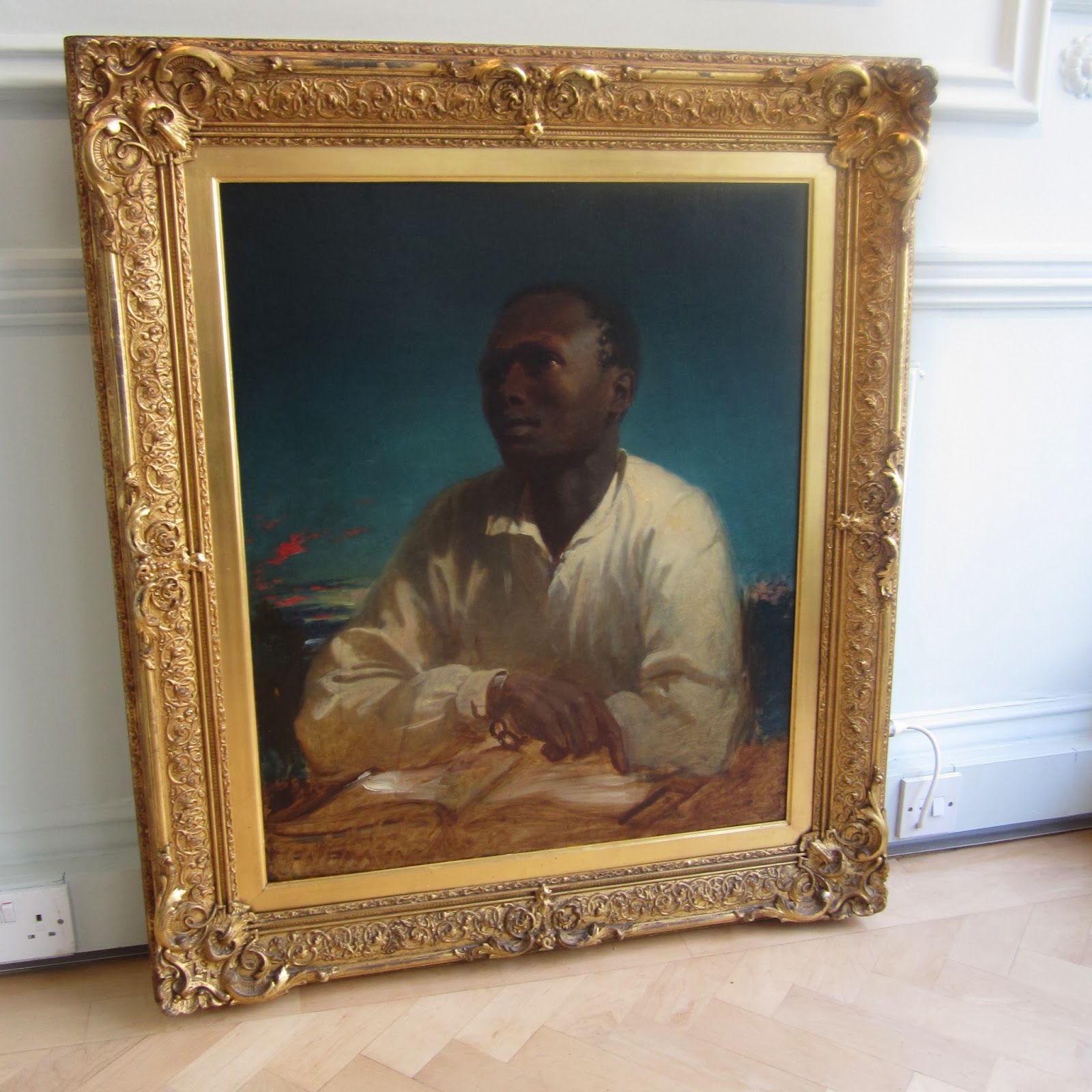 and deciding that it probably depicted the enslaved 'Uncle Tom', I returned to my very old RA lists to find that Uwins had exhibited a painting entitled 'Uncle Tom: A Study from the Life' in 1856.    The painting is evidently indeed a study from a live person, rather than a dramatic scene or a fictional character. It must have been painted sometime between 1853 and 1855 when ill-health forced Uwins to retire from his post at the National Gallery and give up oil painting (he died in 1857).  Parts of the picture, such as the table and book are unfinished - although the sketchiness actually enhances the appeal - so it seems likely it was sent to the RA  anyway, to chime with the public mood.  In its first year, a million copies of Stowe's story were sold in Britain and in 1855 it was described as 'the most popular novel of our day.'
'A Study from the Life' implies that the figure depicted was a man of African ancestry living in London - of whom there were of course many in the 1850s, who could have been employed as a model.  Was he perhaps even closer to the subject? one of the formerly enslaved from the US who sought refuge in Britain during this decade?   Collectively known as 'fugitive slaves' after the law of that name passed in 1850 decreeing that those who had escaped should be returned to their 'owners' (prompting groups to hunt down runaways) several are known to have found asylum in Britain and for some likenesses were published, usually as frontispiece illustrations for their autobiographical 'slave narratives' which served both to create [small] incomes for the authors and contribute to British Abolitionist campaigning. Research continues.

The Seasons at Red Lion Square and/or Red House 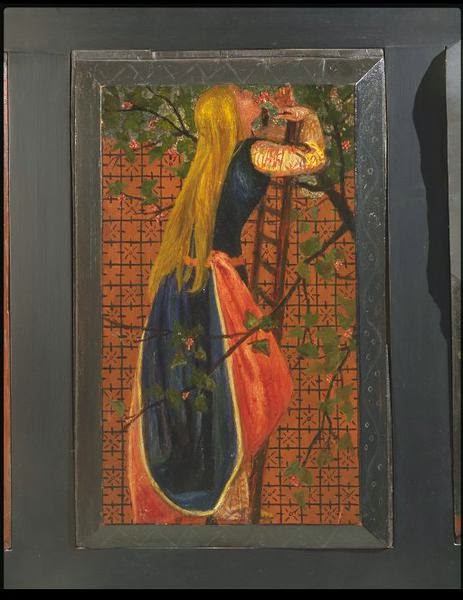 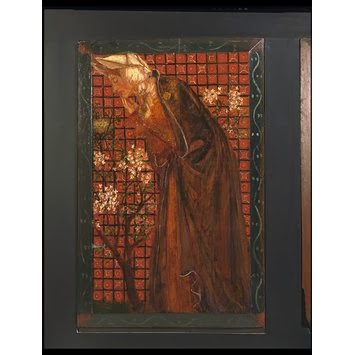 The William Morris Network had an interesting visit to the V&A reserve collection, where we saw the four heavy wood panels painted by Rossetti with medieval ladies representing the Seasons.
And we spent an age inspecting and conjecturing and trying mentally to fit them on to the great settle at Red House, supposedly dismantled and reassembled from Morris’s earlier lodging in Red Lion Square.  Their dimensions do fit the sides of the Red House settle, but the massive bevelling does not. 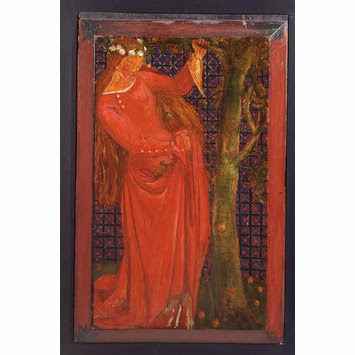 On two panels the bevels are painted red, on two they are greeny-black with paler patterning. Two figures face left, two right, but neither the poses nor the colours accord with any linear arrangement of spring-summer-autumn-winter.
Top left here Summer shows the girl eating cherries on the branch. Top right Spring the woman bends over a nest of chicks, amid blossoms. Lower left Autumn the figure catches apples as they fall into her skirt. Lower right, presumably  Winter,  she drinks from a fountain while wrapped in a cloak, with evergreen foliage behind.
Each figure is 'too tall' for the picture-space, bent heads and feet touching the top and bottom edges in an awkward quasi-medieval manner.
According to J.W.Mackail, presumably following information from Burne-Jones, as soon as the great settle arrived at Red Lion Square in early 1857, Rossetti 'at once made designs for oil paintings to be executed on the panels of the cupboard doors [a Salutation of Beatrice triptych] and the sides of the settle', which sound like the present pieces.
Two of the panels ( Spring and Winter ) were later owned by H.C.Marillier, who became managing director of Morris & Co in 1905 and who in 1910 sent photos to Jane Morris asking about their origin.   Jane replied on 8 August:
'The left hand lady I think is certainly by Rossetti, the other I can't say - from what you say of the Indian red background with the diaper I can see in the photograph, I think it is possible they were the inside of the panels  of the bookcase at Red House - which were very thick and may have been divided after they left our hands.'
Inferentially,  Marillier's 'left hand' photo was of the Winter panel, the other with diaper was Spring.  But what was the 'bookcase' at Red House?  was that Jane's term for the drawing-room settle, which certainly has more shelves and cupboards than seat?   But if  these heavy panels, 3.2cm thick, were 'inside', the bookcase doors would surely have been too heavy to be practical. And there are 3 not 4 vertical divisions on the settle.  It all remains rather a puzzle.
If the panels were in fact painted for the sides of the original settle, it seems likely that the two facing left (Winter and Spring) were on the right side, the figures facing towards the room, with Summer and Autumn on the left side, though this arrangement makes no more logical sense than any other.

On 20 February artist Grace Adam will lead a gallery tour of the Jane Morris centenary display in Room 28 at the NPG.   I’ve no idea what to expect, but here is an extract from Grace’s artistic statement, which says her own work explores

“notions of what can be beautiful and where. How do we negotiate and influence our domestic and wider environments? How we interpret contemporary and historical ideas of beauty is being tested through a series of pieces whose surfaces crawl, bulge or sit awkwardly.”

And here are a couple of examples of her artwork.

With her image and lifestory inspiring those beyond the immediate Pre-Raphaelite fanbase, suddenly, it seems to me, Janey is acquiring the kind of cultural afterlife that Lizzie has so long enjoyed [or endured, in some cases].

I’ve also just received proofs for ROSSETTI’S OBSESSION, the forthcoming exhibition at Cartwright Hall in Bradford, itself another manifestation of romantic afterlives, opening in March.
Posted by Jan Marsh at 11:06 No comments: