in the spacious Fine Rooms at the Royal Academy
which when I visited were virtually deserted compared to crowds in main exhibition
is a selection of pieces shown during the 250 year history of  the RA
first at Somerset House, then in National Gallery and since 1868 at Burlington House.
It's a interesting survey-cum-mix, with no patchwork jumbling of objects, and does a reasonable job of chronicling change in pictorial taste over the centuries, with the type of 'correct' chronological display that is so out of fashion right now.
Here: Turner / Constable / Millais / Minton / Emin / Kitaj
many more [but not too many] on view. 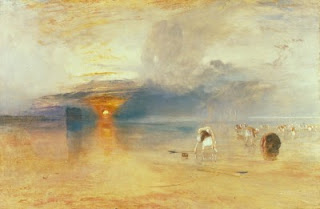 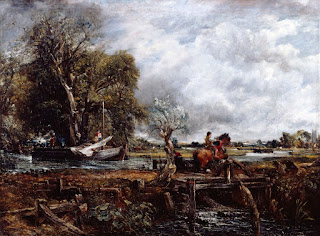 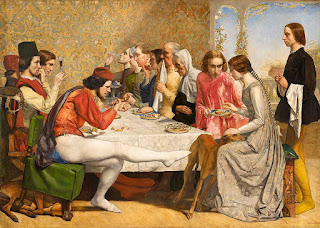 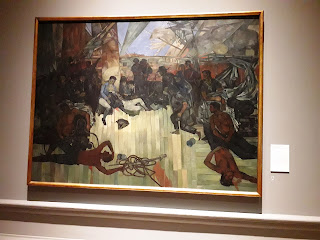 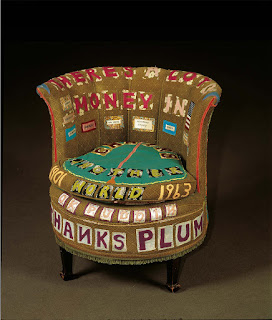 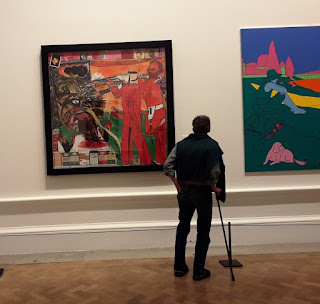 Kitaj's Assassination of the Killer-Critic,   has this detail lower left 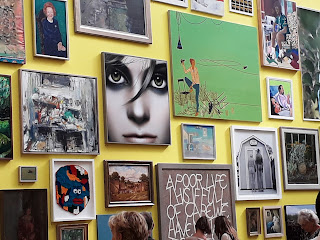 One can't help feeling  that both contributors and selectors [led by Grayson P] have been having  a good laugh creating this year's Royal Academy summer exhibition.  The sherbet yellow room is a sort of satire on the traditional jumble of  disparate large and small serious and comical works, with surely more of the last category than usual.   With such a hodge-podge, it's really hard to see what one is looking at, and the eye swiftly tires of the juxtaposed disparity.  Or quickly re-adjusts to a kind of five-second jump-cut viewing, as with videos and television.
And there are lots of objects plainly made to make one laugh out loud.  Which may be one of the main functions of contemporary art  - Perry's own is often in this vein. 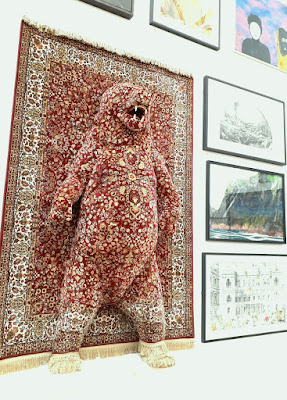 Joana Vasconcelos' opening piece says it all, in a way - as well as being too overbearing to  contain in one shot.... 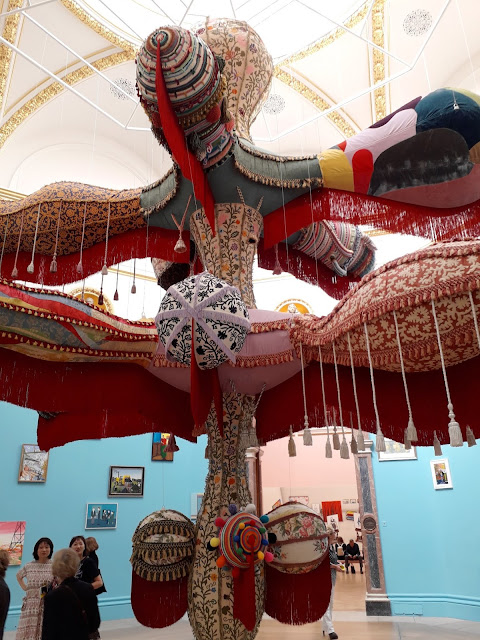 I did like this exhibit, made I think from flattened bottle-caps: 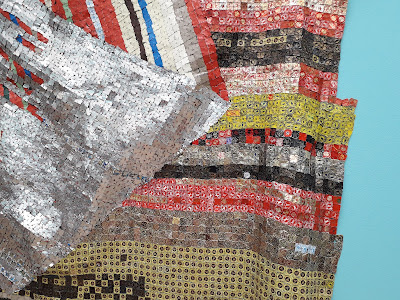 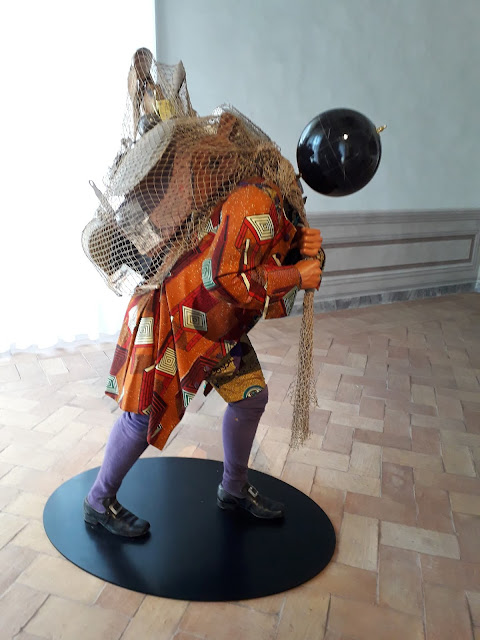 The Invisible Man is a new piece by Yinka Shonibare, installed in the Barbarini Corsini National Gallery in Rome, as part of a project to create 'a dialogue between the work of old masters and contemporary artists on the theme of the portrait and the self-portrait', entitled Eco e Narcisso.

Other works range from Caravaggio to Giulio Paolini, from Raphael to Richard Serra, from Bernini to Yan Pei Ming, from Piero di Cosimo to Kiki Smith, from Luigi Ontani to Pietro da Cortona.    The Invisible Man has been acquired for the MAXXI collection [Museo delle Arte de XXI secolo - geddit?] located in the via Guido Reni.

If not exact to the theme, it's very apt to the moment, because even though the figure is clad in sort-of 18th century costume, he's plainly a homeless, anonymous migrant. 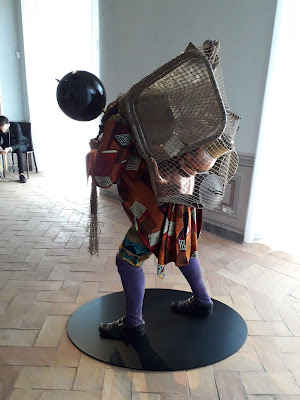 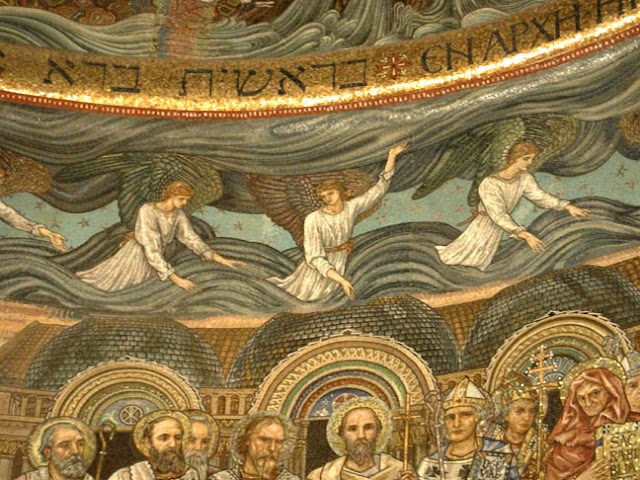 Chiesa di San Paolo entro le mura (St. Paul's Within the Walls) is a Protestant church designed by  George Edmund Street and built  in 1873-1880. It was the first non-Catholic church built in Rome after Papal jurisdiction was reduced to the Vatican in 1870, and ministered to the growing community of American residents and visitors to the city. 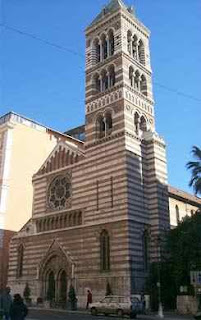 The red-and-white exterior, in travertine and red brick, looks out of place in late-Baroque Rome, but reflects northern Italian Gothic architecture of which Street had made a special study. It also pays respects to the tower of Santa Maria Maggiore, nearby.
The internal mosaics are by Edward Burne-Jones, whose compositional skills, colour sense and theological sensitivity enabled him to create designs perfectly in keeping with the mosaic means as well as his own well-crafted aesthetic. 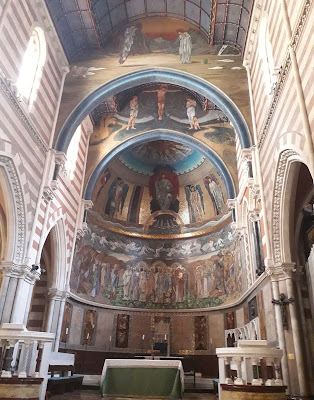 The top pic is from the church's website, the one below taken on site and oddly bleached by the light.  It is a very impressive effect, but also restrained.   Similarly, the apsidal scheme offers homage to that by Jacapo Torriti in Sta Maria Maggiore, but without that scheme's full-on Catholic veneration of the Virgin, which Protestants do not endorse.
Instead, EBJ's iconography includes the Annunciation set in a desert landscape.  Below this a Tree of Life with Adam and Eve and children, which is also a Crucifixion.  Then Christ Enthroned in the Heavenly Jerusalem and on the main register The Earthly Paradise or The Church Militant, with massed ranks of pious women and men and a phalanx of high-stepping horses.
One senses that EBJ had fun designing all this, ignoring St Paul's preaching and epistles. 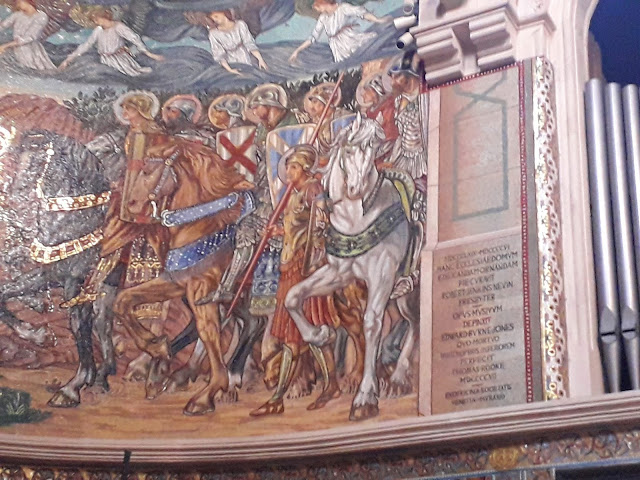 IN FACT as Scott Buckle has shown from a surviving study of the white horse, the horses and sundry other details including heads of saints and martyrs, were drawn by Thomas Rooke, who had a hand in or finished various pieces by EBJ.  Presumably the components of the  scheme were in EBJ's design, and Rooke was practised in emulating the style; so to whom should the ensemble be credited?
Posted by Jan Marsh at 14:34 No comments: 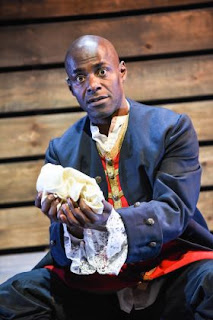 Currently playing at Wilton's Music Hall in Wapping is the solo show by Patterson Joseph narrating the life of Ignatius Sancho, one of the best-known African citizens of London in the 18th century, who became a composer, campaigner and shopkeeper, and was probably the first man of colour to vote in a parliamentary election, when the franchise depended on property ownership.
Born on a Spanish slave ship around 1729 and taken to Britain in 1731, he worked for three sisters in Greenwich and then for the Duke of Montagu before opening a grocery store in Westminster.  He married a Caribbean woman and had several children, and died in 1780.
Sancho's story is known from his own writings, his correspondence with Laurence Sterne being published in 1782, and from his letters to the press  and involvement in the nascent anti-slavery movement.  His appearance is known from the portrait by Thomas Gainsborough 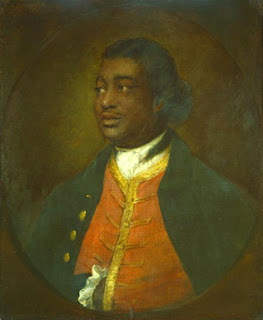 which Patterson Joseph recreates on stage, apart from the hair - it's not clear from the portrait whether Sancho's is fashionably long or a black Georgian-style wig,  but he's clearly presented as a Georgian-style gentleman.
From his years as a footman and valet, through his time as a tradesman, friendship with Sterne and casting his vote for Charles James Fox, Joseph's is a witty account of Sancho, following the historical sources but including dramatic animadversions, and a tour de force in terms of theatrical event. 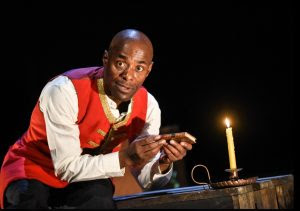 and here are details of the current performances :https://www.wiltons.org.uk/whatson/420-sancho-an-act-of-remembrance

One episode in the show evokes Sancho's music, which includes fashionable dance minuets, reels and songs.  More about his compositions here:   http://sanchomusic.synthasite.com/

Wilton's Music Hall is a resurrected building that has lately been preserved in all its decay.  As a theatre it was designed for comedians and popular song-and-dance acts and just about works for Joseph's energetic Sancho monologue, but places most of the audience rather far from performer.  However, its historical quality certainly adds to the theme of  forgotten stories.

I'm wondering if some enterprising actors are thinking of dramatising the life of Francis Barber?   There should be some good scenes to write set in Samuel Johnson's house, especially when Barber entertained his fellow Black Londoners there

A new collection of essays on this theme is being published:
RUSKIN AND NINETEENTH CENTURY EDUCATION.   details here
John Ruskin, whose bicentenary will be celebrated in 2019, was not only an art historian, cultural critic and political theorist, but also, above all, a great educator. He was the inspiration behind William Morris, Leo Tolstoy, Marcel Proust and Mahatma Gandhi, and his influence can be felt increasingly in every sphere of education today, for example, in debates about the importance of creativity, grammar schools and social mobility, Further Education, the crucial social role of libraries, environmental issues, the role of crafts as well as academic learning, the importance of fantasy literature and the education of women. Though Ruskin was a great believer in ‘Separate Spheres’, he also championed wider learning opportunities for girls. ‘John Ruskin and Nineteenth-Century Education‘ brings together ten top international Ruskin scholars to explore what he actually said about education in his many-faceted writings, and points to some of the key educational issues raised by his work, concluding with a powerful rereading of his ecological writing and his apocalyptic vision of the earth’s future.  Edited by Valerie Purton, this volume is dedicated to Dinah Birch, a much-loved Victorian specialist and authority on Ruskin, and makes a fresh and significant contribution to Victorian studies in the twenty-first century.


To declare an interest, this volume contains an essay by me, 'Mad Governess or Wise Counsellor?'  on the context and contents of  Ruskin's (in)famous text Sesame and Lilies.  Here below is the opening :


This chapter begins, unusually for me, with an autobiographical anecdote that concerns my old school.  Some little while ago I was invited to the annual Founder’s Day, and as the invitation was insistent,  I duly presented at 10.00am in the school hall, to find a seat with my name on it. Much of the programme was familiar, a rather uncanny sensation after so many years, but then members of the upper sixth performed a drama written by themselves, which enacted episodes from the story of the Pre-Raphaelite Brotherhood, involving John Everett Millais, Dante Gabriel Rossetti, Elizabeth Siddal, John Ruskin et al.   I knew then why I had been invited, as an alumna who has written extensively about this group and their art. Being a connoisseur of dramatisations and re-tellings of the PRB’s now near-legendary events, I enjoyed the somewhat tongue-in-cheek presentation by these stylish young women.
More followed, in the speech by the head teacher. I recalled that in my day the head was a historian and annually pulled out of the past some aspect of the school’s founding – by none other than the redoubtable Frances Mary Buss, this being North London Collegiate School and she being immortalised alongside Dorothea Beale, the formidable founder of Cheltenham Ladies College:

Miss Buss and Miss Beale
Cupid’s darts do not feel;
How different from us,
Miss Beale and Miss Buss.

On this latest Founder’s Day at NLCS the historical theme was art. Frances Buss’s father was  an unsuccessful painter who taught drawing at her new school, opened in 1850,and through whom she had artistic acquaintance. In the school archive is the record of a visit by Millais, who happened upon a student practising the harp, and also a letter to school governor Annie Ridley from John Ruskin, in which he wrote: ‘I am much interested in what you tell me of the school and of the feelings with which it has been founded’, adding, ‘I might perhaps be able to come and see what you are doing and to hear how I could promote it.’


This was intriguing to hear, because the school’s founding principles were that girls’ education should be as intellectually rigorous as that of their brothers, should include public examinations and in due course preparation for university, and should also involve regular physical exercise.  Whereas Ruskin, as has always been assumed, promoted gender difference in education,  ‘Sesame’ meaning classical and scientific learning for a boy, ‘Lilies’, sympathy and service to others for a girl:
All such knowledge …as may enable her to understand and even to aid, the work of men … yet not as knowledge, not as if it were for her an object to know, but only to feel and judge….


So what brought these two views into potential collaboration? 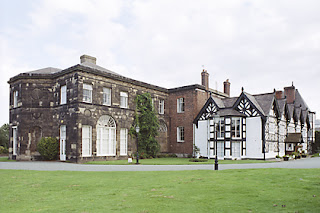