as evident from the date below, I intended to publish this post in September, but failed, because I intended to write more fully.
Bill Richmond will probably feature in the next instalment of BLACK & BRITISH FORGOTTEN HISTORY on BBC2 on 16 November, so here is a partial preview...
The memorial plaque (alas temporary) is under the black cloth 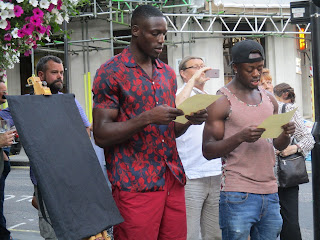 an unusual gathering at a central London pub on 13 September - although a very apt location, as the Tom Cribb pub marks the district between Haymarket and Leicester Square where pugilists were to be found in the Regency years, when prizefighting and sparring were cross-class [male] attractions. 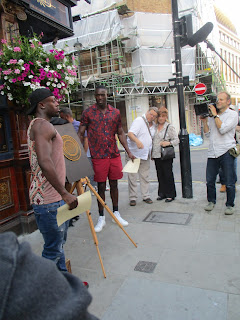 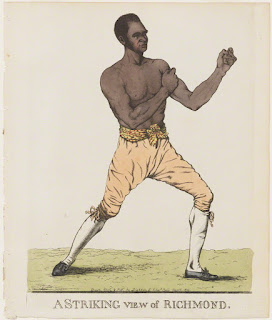 Black History Month, in my recollection, started slowly, then took off and grew vigorously around 2003, with the Great Black Britons list, and 2007 with the bicentenary of the Slave Trade legislation. More recently, it seemed to have diminished, as if the community had found other subjects of interest and concern, while the rest of us had just lost interest.  But this year has witnessed an immense resurgence of Black History events and initiatives, especially at local level, which have evidently been a good while in gestation  - so many that I hope someone is keeping a record of all Black History events in 2016, or some may get overlooked and thus again forgotten.

When I was researching images of Black Victorians many years ago, the message from the Black community was that one can't find what isn't there - and Black History wasn't there for the good reason that Britain had ignored or buried it - that is, absence was the story of Black History.
It still is in many respects.  But the recovery work that has been and is being done demonstrates yet again that [temporarily] invisible does not means non-existent and that almost everywhere one looks historically speaking one finds evidence of hitherto  unrecognised Black presence.

The upcoming four-part series Black and British a Forgotten History, written and presented by David Olusoga on BBC2, is the latest manifestation.  I don't have the full list of the 20 memorial plaques marking Black historical presences and personalities that structure the series, One might think that  some like Sarah Bonetta Davies, Francis Barber and Bill Richmond are in fact pretty well known,  but it's probably true that most audiences will either not have heard of them, or don't recall any details.  Indeed, history of all kinds is so swiftly overtaken  and re-forgotten that everything needs repeating regularly.  Or Black History can vanish again.

Here is a recent item on efforts to mainstream Black History  -  unsurprising but useful in assessing the  current situation:
18/02/2017 The Voice
"Black history already has sufficient coverage", says May
Written by Poppy Brady
CAMPAIGNING MUM Stephanie Pitter took her crusade for black history’s inclusion in the National Curriculum to the heart of British Government in 2015 when she was invited to the Department of Education. At the time, the department’s head of history Paul Adams fell short of pledging to include black history as a self-contained topic, but promised to tackle racism issues in schools.
However, as racism remains an issue, Stephanie is as determined as ever to make sure black history is taught in every school in the land, despite having just received a letter from Prime Minister Theresa May insisting that her government does not believe ‘black history should become a statutory programme of study.’
The letter is a blow to Pitter who wrote to the new Prime Minister before Christmas asking for the opportunity to discuss the issue in Downing Street, a request that has been politely but firmly refused. Private Secretary Lorna Gratton wrote to Stephanie in January saying: “Unfortunately, due to heavy diary pressures, the Prime Minister is unable to offer a meeting at this time.” While agreeing with Pitter and appreciating her “dedication and commitment to creating a society based on unity,” the letter claims that black history already has sufficient coverage.
It states: “The history curriculum in primary schools provides scope for black history to be covered, with references to important historical figures such as Rosa Parks and Mary Seacole as examples of individuals who have contributed to national and international achievements.Further extensive opportunities arise in the secondary curriculum both at Key Stage 3 and beyond. We do not, however, believe that black history should become a statutory programme of study and do not have plans to change this position. We want to ensure that teachers have the flexibility and autonomy to handle topics in ways that are most appropriate and sensitive to the needs of their pupils.”
Pitter told The Voice:
“I feel as though we are a forgotten people because there is so much more to black history than slavery, Rosa Parks and Mary Seacole. At the same time, I am not belittling either of these heroines in any way. There is a whole raft of black history about, for example, black British inventors and the rulers of Africa prior to centuries of enslavement, which is simply not taught. I almost have a sense that those in positions of influence have a fear of black knowledge. Why is black culture feared? We are not talking about a religion – this is one of the world’s oldest cultures. I find it all very frustrating that the subject is really only taught in the broadest of ways.”
The mum-of-four, who has been part of a school governing body, added:
“I’m involved in many community issues and I know from personal experience that racism is still out there in schools because parents tell me. Their children continue to be racially abused and this is still not taken seriously. Teachers often turn a blind eye. We all know that ignorance breeds racism and this is where education comes in. I had hoped that we would be the generation to change all this. I intend to take up this issue with the Office for Standards in Education, Children's Services and Skills (OFSTED). The letter I’ve received from Downing Street states that, "We require all schools to teach a balanced and broad curriculum that promotes the spiritual, moral, cultural, mental and physical development of pupils," but I simply don’t think this is being developed far enough.”
Pitter won national admiration when, in 2012, she launched a petition for black history’s inclusion in the National Curriculum. She began in her home city of Birmingham, with her campaign spread across the country and she soon had more than 55,000 signatures. High profile names also signed up such as Birmingham-born Liverpool footballer Daniel Sturridge and actor David Oyelowo, who played Martin Luther King Jr. in the film Selma.
Supporters from across the country joined Pitter in Whitehall when she led talks with Department of Education in October 2015. Two members of Black History South in Southampton who went to London told The Voice: “We had to come and support Stephanie. It’s a whole issue of identity for our children. They need to be taught their own history in order to stand their ground in life.”