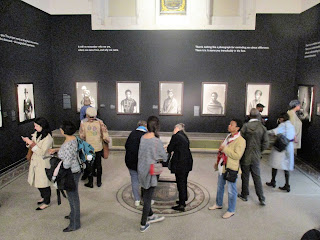 The Autograph ABP project Black Chronicles, whose aim is to discover and display photographic portraits of sitters that in the words of curator Renee Mussai  'offer a fascinating array of personal narratives that defy pre-conceived notions of cultural diversity [in Britain] prior to the Second World War', has teamed up with the National Portrait Gallery for a sequence of displays, drawing works from  both the NPG's extensive photographic collection and (via large-scale modern prints) from glass negatives found in the Hulton Getty's collection from the London Stereoscopic Co., a leading commercial outlet in the late nineteenth century.  Those from the latter featuring members of the African Choir from South Africa, which visited Britain in the 1890s, were shown at Autograph's Missing Chapter exhibition at  Rivington Place, and now come with additional information about the sitters drawn from ongoing research.

The NPG items feature the now well-known Sarah Forbes Bonetta and her husband James Labulo Davies; the young Ndugu M'hali  from central Africa, whom Henry Morton Stanley brought to the UK after his Livingstone expedition, as a kind of trophy of authenticity, the early international boxing champion Peter Jackson from the Caribbean island of St Croix, and Dadabhai Naoroji, the first British Indian MP, elected in 1892.
In addition, Black Chronicles 1862-1948 includes newly-acquired portraits of dancers from les Ballets Negres, Britain's first all-black ballet company, taken in 1947 by Angus McBean, and a selection of photographs by George Hurrell of Ram Gopal, who pioneered Indian classical dance in Britain in the same era.

BLACK CHRONICLES III  closed in December:
a photo from the final event 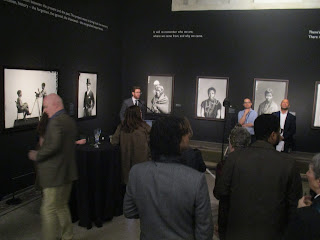 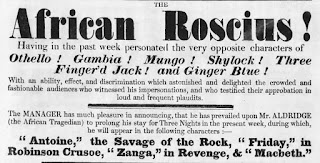 The new exhibition at the British Library, Shakespeare in Ten Acts, has an act devoted to the acting of Othello, Aaron and Lear by two American actors: Ira Aldridge and Paul Robeson.  More here although the elements are somewhat scattered down different links.

According to a brief bio contained on a playbill for the Theatre Royal, Doncaster, dated 1 March 1841,  which must have been supplied by Aldridge, his father came from the Fula people in Senegambia, and was sent – presumably by missionaries - to Schenectady College, which had been founded in 1795 on non-denominational lines and is now Union College, Schenectady, to become a minister.  Ira (whose name is from a priest of David, like Zadok) was born 24 July 1807 and made his name on stage in Britain, playing a range of characters, from tragic to comic, farcical to musical.

One enters this section of the exhibition through a muslin curtain printed with an image of Aldridge as King Lear, (though happily not to the sound of ‘Jump Jim Crow’  which was one of Aldridge’s comic songs)  and a notable feature are images of early press notices found in the BL’s newspaper archive and now digitally available.  The generally hostile reception he received from the media in London is contrasted with the applause in the provinces and throughout northern Europe when he took to touring there.  There’s a playbill from Heidelberg for May 1854, and Staffordshire figures of Othello & Iago from 1858, probably prompted by his popularity, though the resemblance is remote. 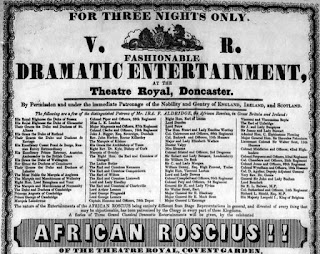 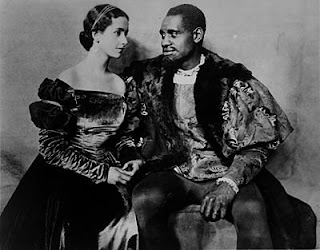 Cross the room for photos of Paul Robeson, who when he played Othello in London in 1930 had vocal coaching from his predecessor’s daughter Amanda Aldridge.   After returning to the USA, he was arrested in 1957 on suspicion of being a Communist., and his passport was confiscated, making it impossible for him to work abroad. British trade unionists, politicians and actors joined together to petition for his passport to be returned so that he could once again play Othello in the UK.

The BL exhibition displays a letter from the LCC’s Paul Robeson Committee asking Laurence Olivier for his support, and Olivier’s letter of somewhat shamefaced refusal, on the grounds that he aimed to play Othello himself – which he did, in blackface, in 1964.   Before that, however, the campaign was successful and Robeson played the part at Stratford in 1959. 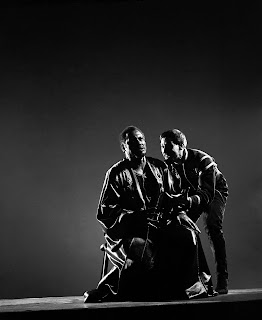 Also in the exhibition is a community printshop poster  produced by Lincoln Cushing and the Syracuse Cultural Workers in 1985 and borrowed from the V&A.  Showing Robeson in heroic mode, it demonstrates how his reputation lived on posthumously like that of Aldridge, so that both can inform the present.