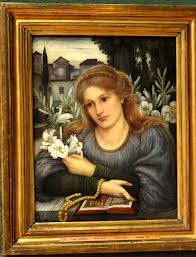 Poetry in Beauty: the Pre-Raphaelite Art of Marie Spartali Stillman  opens at the Watts Gallery, Compton, on 1 March.
blurb here 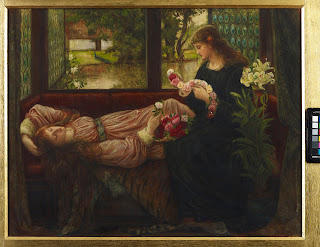 For those new to the Watts Gallery, this is where it is
As you see, right on the Pilgrims Ways from Winchester to Canterbury.  And just nearby is the unusual Cemetery Chapel, designed and decorated by Mary Watts, which is worth a visit in its own right - enchanting or eerie depending on weather and atmosphere.

And  the Wattses' home Limnerslease is open for tours, as the project to develop house and studios as a centre for heritage learning, craft skills and apprenticeships gets under way.

The exhibition catalogue Poetry in Beauty: the Pre-Raphaelite Art of Marie Spartali Stillman is available from the Watts Gallery shop and from amazon:
http://www.amazon.co.uk/Poetry-Beauty-Pre-Raphaelite-Spartali-Stillman/dp/0996067612 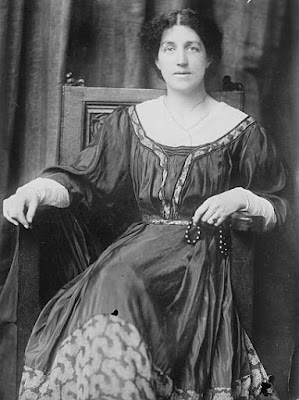 The MAY MORRIS conference takes place 13-14 May, based at the William Morris Gallery with visits elsewhere.              Programme details here

May Morris: conference to examine influence of Arts and Crafts pioneer
May Morris Conference 2016
Friday 13 May and Saturday 14 May 2016
William Morris Gallery
Forest Road, London E17 4PP
The William Morris Gallery is to host a landmark conference presenting important new insights into the career of leading arts and crafts designer May Morris, the younger daughter of William and Jane Morris.
The event, which marks thirty years since the publication of Jan Marsh’s seminal biography, Jane and May Morris – A Biographical Story, will bring together new research on May’s life and work from curators, academics and independent scholars. The conclusions of the conference will inform a major new exhibition of May Morris’s work at the William Morris Gallery in 2017.
May Morris was a professional designer, embroiderer, teacher and writer. She exhibited widely in the UK and abroad, founded the Women’s Guild of Arts and was responsible for designing some of Morris & Co’s most iconic textiles. May also participated in the early Socialist Movement and was instrumental in preserving and shaping her father’s legacy.
Included in the two-day study event are visits to the V&A’s Clothworkers’ Centre and the William Morris Gallery’s collection store to view rare May Morris textiles. Delegates will also have the opportunity to take part in a riverside walk exploring the environment in which May lived and worked in Hammersmith, led by the William Morris Society.
The keynote lecture will be delivered by Jan Marsh, who will reflect on the growth of public and academic interest in May Morris’s career since the publication of her biography in 1986.
Jan Marsh, President of the William Morris Society,  says:
‘Always overshadowed by her illustrious father and also by her mother’s reputation as a Pre-Raphaelite muse, and originally ignored by the Dictionary of National Biography, May Morris has never received the attention her own achievements deserve.   This Conference will explore many facets of her career, bringing a wealth of recent research into view.’
Anna Mason, Manager of the William Morris Gallery, said:
‘’May Morris was a talented designer and maker and made a unique contribution to the international development of art embroidery. The William Morris Gallery holds a rich archive and is delighted to be collaborating with our partner organisations to convene this conference. We hope it will bring even more new material to light in advance of the exhibition planned in 2017.”

The full programme can be viewed at https://maymorrisconference2016.eventbrite.co.uk. Single and two day tickets can also be bought via this link.

The conference is open to the general public as well as those with an academic or professional interest in May Morris’s life and work.
Posted by Jan Marsh at 12:55 No comments: 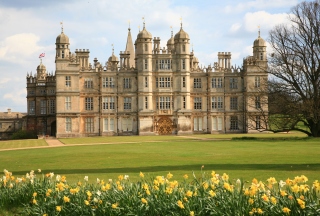 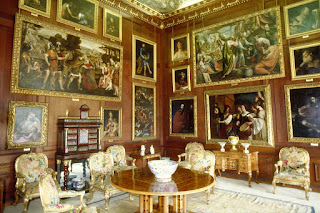 The Burghley art collection is now viewable online - which is often preferable to viewing in situ where works may be hung high or in poorly-lit corners - and contains several Adoration of the Magi images,

including an early work on copper by Ventura Salimbeni 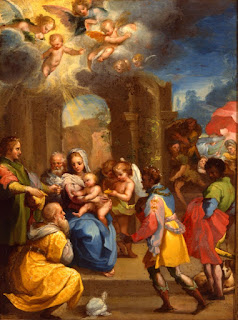 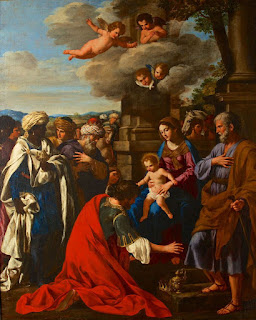 plus this by Giacinto Gimignani  (no, me neither)

these after Rubens and Carlo Dolci 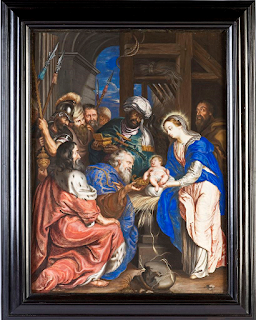 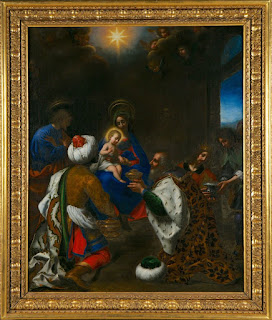 and this later image attributed to a painter in the circle of Jan van Haensbergen, where the European Magi have come on horseback and the African on a camel: 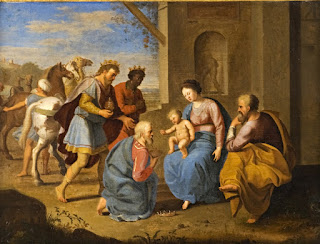 Other items of note are the portrait of (probably) the 5th Countess, with her brother and a kneeling pageboy, 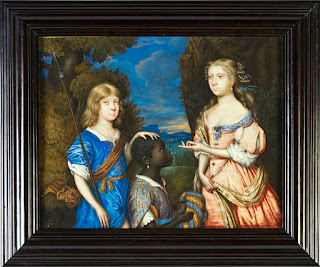 by miniaturist Nicholas Dixon, dated to 1668

finally, this exquisitely worked bust of A Moor, decorated with enamel and precious stones,   from around 1600 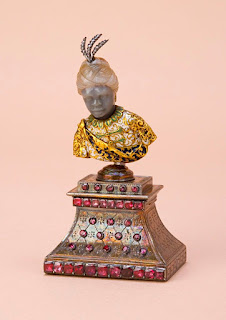 The turban feathers and the whole plinth were added later, so that it was described in a 1690 inventory as 'A moore's head cutt out of an olive stone [it is in fact agate] with pearle, rubies and diamonds'.