I NEARLY MISSED  the Botticelli exhibition at the V&A owing to the publicity and reviews concentrating on its promised ‘re-imaginings’  such as this fearful example.  And so the second mistake was to allocate it only a short time in busy day.  Thus, when I finally reached its true Botticellian section, I was triply angry with the curators who had insisted we waste half our time with Warholian and worse vulgarities from the twentieth century, plus a large roomful of Victorian hommages, before encountering the real thing, in all its wondrousness.

From darker, sexed up spaces filled with versions, allusions and pastiches of Primavera and the Birth of Venus one passes to a white room packed with original and studio works – though alas neither of the two famous picture (that was always too much to hope for) – in a welcoming atmosphere of pictorial purity  and grace.   The large selection of religious works, many in tondo form, express a  devotional sincerity that emphasises the spiritual beginnings of European art, while the male portraits  convey the confident laddishness of young Florentine men, all swagger and style.


Although very Botticellian, the profile female heads seem less visually interesting - and two here are categorised as 'ideal portraits' - perhaps because they lack the direct, arresting gaze. One that does engage the viewer is that now known as a portrait of Smeralda Bandinelli, looking from a loggia window and wearing a red silk gown under and over-garment of finest gauze.  It was bought in 1867 by Dante Gabriel Rossetti, via Charles Howell, as an undoubted Botticelli, which is now agreed,and played its part in the Victorian revaluation of the artist.   Ss did the emergence of the Mystic Nativity in Britain in the mid-nineteenth century.    Burne-Jones owned a workshop version of the Coronation of the Virgin, now in the Metropolitan Museum, and it is clear how influential Botticelli's spirit and style were on the later artist, represented here by Luna and Evening.


The star picture is that entitled Pallas & the Centaur, with a somewhat abashed centaur having his hair pulled by a goddess of some sort, draped in olive leaves and bearing a most tremendous axe. The possibly neo-platonic allegory is still uncoded.  Typically sinuous rhythms of limbs hair and drapery are held by vertical and horizontal rocks, pole and landscape, in sober hues offset by whites, gold and the thin scarlet strap of the centaur's quiver.   It's mysterious, beautiful and quite compelling.

In retrospect  I fully understand the curators' decision to mount the exhibition in reverse order.   Had it started more conventionally with the originals, the later tributes would have seemed merely honest failures, while the recent 're-imaginings' would have aroused derisive and sometime disgusted laughter.   It all has an air of Golden, Silver and worse than Leaden Ages. 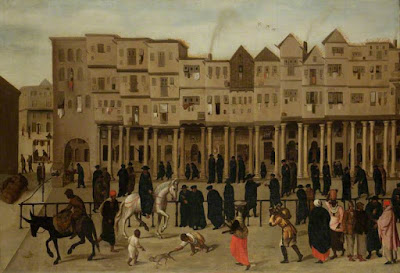 A pair of old, quite dark-looking pictures showing a cityscape bustling with townsfolk, has hung at Kelmscott Manor since the early 1870s, when Rossetti shared the house with Jane & William Morris.  They are intriguing, not least because among the scores of figures going about their business in a colonnaded street, there are a dozen or so servants and urchins of evident African ancestry.
The street has been identified as the Rua Nova dos Mercadores in Lisbon, Portugal, in the late 1500s; and the painting style as Northern or Netherlandish.  The two panels were originally  one horizontal urban view that was later cut in two, presumably for ease of transport, each half being nearly a metre wide. 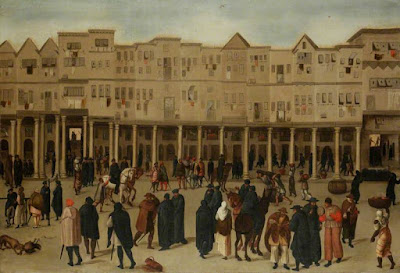 Portugal in the sixteenth century was a foremost trading nation in regard to Africa and Asia, thanks to its ships and navigators, and Lisbon was the entrepot for luxury goods – lacquers, porcelain, ivories, carved crystal, silks, gemstones, goldware, tropical timber and exotic animals as well as the precious spices from the East Indies.   The painting even includes a turkey from the New World, making the Rua Nova a microcosm of what would become the global market in goods and commodities.   So it’s no surprise that Africans – who at this date are likely to have been African-born  –  are shown there, in the city streets.  Like all the figures, they are generically portrayed, distinguished by their faces and hands and clothing from the many black-clad merchants (few, if any, white women are visible, since the everyday street was a male space).
The pictures, together with a third similar townscape, which includes a mounted African merchant, are the starting-point in The Global City On the Streets of Renaissance Lisbon  edited by Annemarie Jordan Gschwend and Kate J P. Lowe and published by Paul Holberton with support from the Gulbenkian Foundation. This remarkable and informative book ranges across the non-European people and objects that were to be encountered in the Rua Nova,  exploring the African presence also in contemporary documents.
It includes an account of how the panels reached their present home, through Rossetti, who purchased them in 1866 from the backroom of a print dealer in the City of London, at a time when he was buying up antiques and curiosities for his house in Cheyne Walk.  On a cold Easter weekend, he wrote to his fellow-artist George Boyce:
"I called on you to see if you would come on with me  to a printseller’s in Bunhill Row, who has a very remarkable picture that I am in treaty for & went to look at again.  It interests me very much & I should like you to go & look at it if you are rambling that way.  It is in the back parlour of the printshop which is a interesting old shop at a corner near the Old Street end of Bunhill Row.  He will show it you if you ask to see it.  It is a large landscape with about 120 figures of the school of Velasquez – not by the great V. himself  I must needs feel pretty sure, though it is so fine it almost might be;  but I abundance of interest as to subject & in grandeur of landscape, nothing could well be more delightful.  I have made an offer which is under consideration, so don’t be too enthusiastic to the owner lest he should price his goods higher."
The dealer is now identified as George Love.  It is not known what price was paid, but within six weeks Rossetti had invited Burne-Jones to see ‘the undoubted and stupendous Velasquez’ installed at Cheyne Walk. Possibly as soon as summer 1871 it (probably in two halves) was taken to Kelmscott, where Rossetti and Janey were furnishing and decorating the newly-leased Manor, and where it would have seemed suitable for a part-sixteenth-century house.  It remained there after Rossetti left Kelmscott in 1874, thereby escaping the sale of the Cheyne Walk contents after his death, and is still in situ, although until recently its subject was as unknown as its artist.


The Global City conjectures that Rossetti was alerted to the picture in Love’s shop by Seymour Haden, printmaker and brother-in-law of James Whistler, both being in Rossetti’s social circle. Anne Anderson has suggested the tip off came from ‘the eponymous dodgy dealer’ Charles Howell, with whom Rossetti was on even friendlier terms in 1866.  No intermediary is actually required: Rossetti regularly haunted antique dealers in search of ancient furniture, paintings and especially Chinese pots.   But Howell is an intriguing idea, because he was Anglo-Portuguese and notorious not only for dubious dealings but also for unexplained travels or absences from London.   He was also a sharp connoisseur with what William Rossetti described as ‘quick and accurate discernment of the merits of works of art and decoration of many kinds, along with extensive practical knowledge of their market value’. It is possible that on a trip to his mother’s family in Lisbon, Howell obtained the Rua Nova painting and used Love’s shop to sell it on  - not as an anonymous Netherlandish work but as an unknown yet ‘undoubted’ Velasquez.  Just plausible, anyway as, even allowing for three centuries’ traffic, it is hard to guess how or when the picture might have travelled from Portugal to Britain. 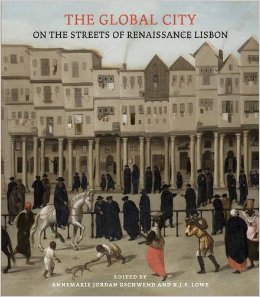 The Rua Nova paintings can be seen on the website of  the Society of Antiquaries.