In the late 1860s Marie Spartali (born 1844) acted as model for pioneering photographer Julia Margaret Cameron (born 1815).  Both families had holiday homes on the Isle of Wight and were acquainted through the Pre-Raphaelite painters.   The photo sessions took place in Cameron’s studio in Freshwater, over several days, Marie recording the fatigue of sitting  for repeated shots.

Marie was at this time studying with Ford Madox Brown and enjoyed a successful exhibition debut in 1867.  Cameron was always seeking willing models for her photographic compositions where sitters were posed  as fictional and allegorical figures, requiring elaborate preparation and accessories.  Marie posed as ‘Imperial Eleanore’ from Tennyson’s poem, as Hypatia, as 'The Spirit of the Vine', as Mnemosyne Mother of the Muses (maybe in allusion to her Greek heritage),  and as The Duenna.

Some of the original prints, given to Marie by Cameron, will feature in our forthcoming exhibition Poetry in Beauty The Pre-Raphaelite Art of Marie Spartali Stillman, at Delaware Art Museum and the Watts Gallery next winter. 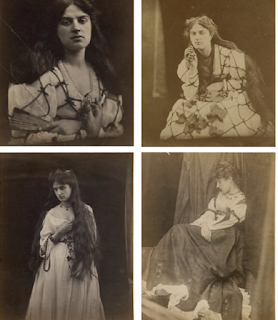 I will also be showing them at the forthcoming conference marking Cameron’s bicentenary, when I argue that Cameron’s example as a professional female artist, committed to perfecting her then-difficult medium, and to exhibiting and selling her work, served as a role model to Spartali, especially after she herself married and took on domestic responsibilities, when women were conventionally expected to give up professional practice.

I further explore the links between Spartali, Cameron’s niece Julia Stephen - who composed her aunt's entry for the 1886 Dictionary of National Biography -  and Julia’s daughters Stella, Vanessa and Virginia, suggesting that in turn Marie’s long exhibiting career was an encouragement to a younger generation, struggling against the engrained prejudice (as Woolf put it) that ‘women can’t write, women can’t paint’.

The conference is organised by University of Portsmouth, 3-5 July 2015.
details here


-   It includes a performance of Woolf’s comedy Freshwater and a visit to the Cameron home and study centre Dimbola on the Isle of Wight.
Posted by Jan Marsh at 19:33 1 comment:

This from Guardian newspaper 'Comment' piece 24 May 2015.
There's some irony in proposing WM for a banknote, when he hoped for ultimate elimination of the capitalism underpinned by financial institutions, but it's a great choice for popular national hero.  Thanks to the Guardian writer for this rousing endorsement.


The quest has begun to find a face for a new £20 note, to go into circulation within five years. Public nominations are being sought until 19 July.   Bank of England governor Mark Carney has narrowed the field to a (deceased) figure from the visual arts – to include architecture, film-making, craft and design.
There is a rich seam of possibilities. Could Emeric Pressburger and Michael Powell, or even Derek Jarman, represent British film-making? Wren has had his turn and Mackintosh has featured on a Clydesdale Bank issue, but what about Sir John Soane, who remains one of the most influential British architects, rebuilding much of the Bank of England itself around the turn of the 19th century? In design, Lucienne Day or Susie Cooper are intriguing possibilities; though if we’re talking ceramics, the great Josiah Wedgwood would be a contender, accompanied, of course, by a teapot, for what could be more British? (Though perhaps he could wait for a new £5, to be immortalised in jasper-style blue and white.) The painter and acerbic social commentator William Hogarth should also be considered; so too the visionary Blake and the sweeping talent that was JMW Turner. This newspaper would heartily welcome Barbara Hepworth: a major figure in the development of modernism internationally, and indelibly linked with both the Yorkshire and Cornish landscapes. 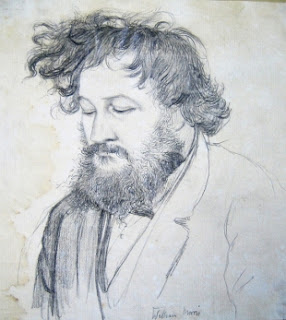 In the end, however, we would suggest that William Morris's splendidly bearded visage is the one to grace the new £20 note. His talents were almost too varied to comprehend: designer and maker of wallpapers and chintz, of course, but also of stained glass and ceramics, of tapestries and embroideries, of calligraphy and illuminated books. He was a poet, a novelist, a writer of early science fiction. He was a pamphleteer, a journalist, a political activist and proto-feminist. He was a campaigner against the wilful destruction of ancient monuments and an environmentalist; he took a sensual pleasure in the beauty of objects and landscapes. He believed passionately in the dignity of skilled and fulfilling work. Ahead of his time, he is a model to a generation of British artists today, such as Jeremy Deller, whose work is multidisciplinary and socially concerned.

Morris would also be a hearteningly radical choice, despite the chintzy reputation (and an appealing offset to Winston Churchill, who will be on the new £5). Stanley Baldwin might have failed to mention Morris’s politics when he opened the Victoria and Albert’s centenary exhibition in 1934, but the artist’s convictions were central to his psyche. He was a revolutionary socialist who wrote and lectured tirelessly, who addressed the striking miners of Northumberland in 1887, who marched on Bloody Sunday to Trafalgar Square. He wished to see a world in which there were neither “brain-sick brain workers, nor heart-sick hand workers … in which all men would be living in equality of condition.”

Of course there were contradictions in this revolutionary-cum-luxury-retailer. But these would be elegantly encapsulated by his gracing the currency. In short, Morris was, as EP Thompson wrote, “one of those men whom history will never overtake”.

LINK for nominations
Posted by Jan Marsh at 20:44 No comments: