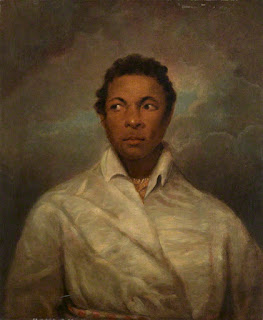 Last year a hitherto unknown version of the portrait of Ira Aldridge by James Northcote now in Manchester Art Gallery (which is on the front cover of BLACK VICTORIANS) was acquired on long loan by the National Portrait Gallery where after conservation it has gone on display in the room featuring literary and theatrical figures from the early 19th century.  Taking as it were a normal position in the contemporary pantheon.

It shows Aldridge half-length in a  white satin stage costume, presumably in the character of Othello, the part he played to acclaim in London and Manchester in 1826 and 1827, and thereafter all over Europe until his death in Lodz in 1867, if not on stage then almost. 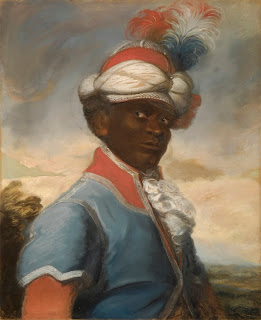 Coincidentally the Tate has recently acquired a fine pastel portrait by Ozias Humphry, which after extensive research has been identified with 'Crayon Picture no.4 The Black Running Footman of the Baron Nagel 3/4 length' listed in a manuscript catalogue of Humphry's collection, and originally exhibited at the Royal Academy in 1795.
Baron van Nagell van Ampsen was Dutch ambassador to London from 1788, which helps the identification through the tricolour of the sitter's cap and costume, like the Netherlands' national flag.

A contemporary reference to Nagell at the Court of St James recorded that he made ' a splendid appearance with his footmen in scarlet and silver and a gay page or running footman was vastly well received'.  Running footmen were messengers in the days before texting and telephoning, like bike couriers today, between wealthy households, offices, parliament and coffee houses. The Tate is hoping to find the sitter's name from Nagell's correspondence. 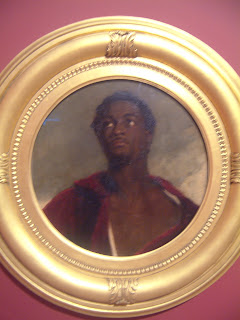 As Tate points out, this is a notable addition to the collection, which otherwise only includes two copies of Reynolds' study of a young man thought to be Francis Barber,  John Downman's pencil drawing of Thomas Williams, a Liverpool seaman, and John Simpson's head study for his full-length painting The Captive Slave.

I have always wondered if Simpson's subject was painted from Ira Aldridge - an obvious and apparently willing sitter at this date - and I'm delighted that Tate has both currently put the work on display probably for the first time and also added the conjectural identification.  The facial features look decidedly similar.