Fanny Eaton as a Sibyl with better image

In early summer 1857, Joanna Boyce arrived in Rome, joining her art school friend Margaret Daniell, who was now married to Dr Piotti.  With a pair of opera glasses, she lay on the floor of the Sistine Chapel studying Michelangelo's figures, as every European artist was wont to do when in the city.
They include the Sibyls, whose gnomic prophecies offered a classical complement to the Hebrew prophets.  One is the Sibyl at Cumae, famous from the Aeneid Book Six, whose grotto near Naples Joanna may have visited some months later.  Another is the Libyan Sibyl, based in the Siwa Oasis, who was with others anciently said to have foretold Christ's coming (hence the propriety of pagan figures in a Christian chapel). 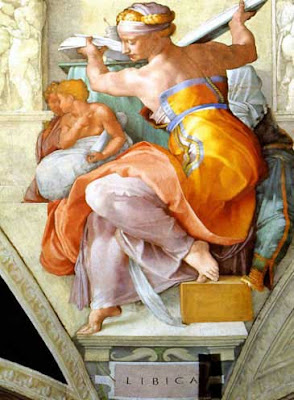 Sibyls are customarily shown with their prophetic books, and the Vatican's Sibilla Libica - who does not herself look African - is looking away as she opens a giant volume, perhaps to signify its oracular, enigmatic contents.  Her naked upper back is wonderfully muscled in its twisting pose, and the artist's studies show several attempts at the toes of tensed left foot, which conveys the momentary nature of the vigorously depicted pose.

The Libyan Sibyl on the mosaic floor of the Duomo in Siena, drawn by Guidoccio Cazzarelli, is more conventionally static, and manifestly African, from her braided dreadlocks to her sandalled toes. 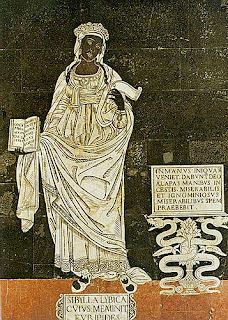 Burne-Jones's Sibylla Libyssa in Jesus College Cambridge is perhaps more Egyptian - and has in place of her book a hand-mirror and jar, or is it a crystal sphere?  (EBJ's other Sibyls here have diverse accessories, presumably alluded to in classical sources).

Joanna Boyce Wells's sibyl was never completed, owing to her untimely death.  It's in  a  list of forthcoming projects and subjects that she left behind.   Other traces are the profile head painted from Fanny Eton, 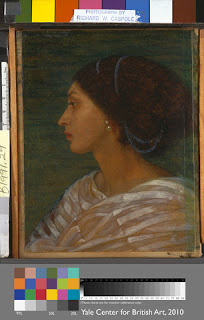 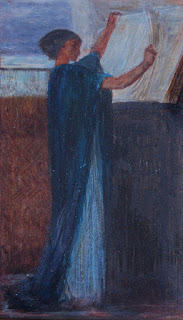 and a  compositional study for which Fanny must also have posed.  Certainly it's her figure and head.  The figure is shown consulting  her Sibylline book, like the Vatican version but from a standing position.  Alas, it is a tiny sketch, but a clear indication of the much larger painting that Joanna planned..