The Dean of Jesus College Cambridge has drawn my  attention to Burne-Jones's depiction of the  Libyan Sibyl in the extensive sequence of Morris & Co glass in the college chapel, to inquire if the portrayal was based on Fanny Eaton.  It's a good question, given that Eaton was the favoured model for numerous dark-skinned and exotic figures in the 1860s, and this design dates from the early 1870s.

But is there any evidence that EBJ used her as a model, or drew her in other guises?   I can't immediately find any.

I incline to think that all the EBJ Sibyls, like most other figures in the window designs, are generalized images.   It's notable that the Libyan is dark-skinned, as pictorially befits a mythical figure whose role is (presumably) to serve the population of north Africa.  But I'd guess that EBJ's decision was prompted by the ten Sibyls on the floor of the duomo in Siena, where the Libyan is notably Black. 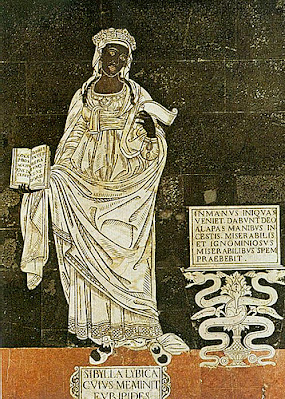 It is however, also interesting to note that another EBJ/WM window at Jesus College includes a second Black figure, in the person of Balthazar, the third Wise Man or Magus representing pagan Africa in the Adoration of the Kings. 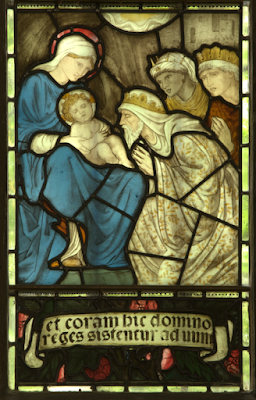 It's true this Balthazar is not very dark.  But, together, the designs introduce a glimpse of diversity into an otherwise all-European  decorative scheme that purports to depict events in ancient Egypt and Syria.